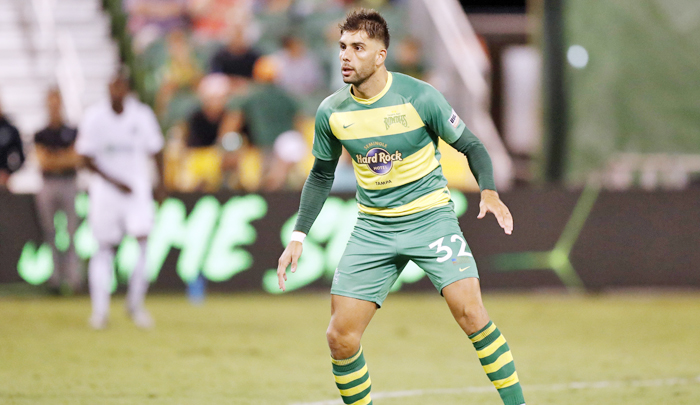 Jaime Siaj racked up many accolades during his college career. He ranks third all-time with 47 career goals in three seasons with the Pfeiffer University men’s soccer program. He also dished out 28 assists, fifth-best in school history. His goal total included 17 in 2015 when the Falcons went 25-0 and won the NCAA Div. II National Championship.

In his pro career, he has faced more challenges.

Siaj was drafted by the Colorado Rapids of Major League Soccer in the 2016 third round. The few months he spent with the Rapids were “outstanding because everything was super professional.” He went on a few preseason trips with the Rapids to Arizona and Los Angeles.

He was sent on loan to the Charlotte Eagles, a fourth-tier United Soccer League Two squad. He scored four goals in 13 appearance. He said his teammates helped create “a really nice environment.”

In 2017, Siaj moved up in league but stayed in the same city, playing with the Charlotte Independence in the USL second-tier. Playing in 18 games, he scored four goals and added three assists.

Last year, Siaj played for two teams, including the USL second-tier’s Oklahoma City Energy. The highlight of the year for Siaj, however, was playing at the international level.

While playing for the Energy, he gained citizenship from Jordan, where his father was from, in order to play for its national team. He scored three goals playing five games for Jordan.

This season, he signed to play with the Tampa Bay Rowdies, which is in the same tier as the Energy and Independence. He has had limited action after suffering a torn right quadricep muscle four months ago.

Siaj said it is great to be back playing soccer in America even though he is injured. The Rowdies lead the New York Red Bulls by two points for first place in the Eastern Conference standings. The 34-game regular season schedule lasts from March to October, with the Rowdies having 13 matches left.

Saying “99 percent” of things going on currently are out of control because of his injury, Siaj said he still “wakes up with the same passion” for soccer.

Talking about his three seasons with the Falcons, Siaj said the college season is “so short and so intense” that he learned how to maintain his intensity which built a toughness in him.

Playing with a talented group of players from across the world has helped him to do the same in the pro ranks, he said.

“We were all away from home in the same situation. That brought us together. We were able to push each other to be better,” Siaj said about playing with the Falcons.

“When the game was going wrong, or when we had to come out of difficult situations, the most important part of our success was how we came together as a team, how great my teammates were. We were basically like a family,” Siaj said.

Differences between college and the pro intensity of training and practice is greater in the pros, he said. There is also the faster pace of the game.

Siaj’s short term goals are to get back to playing shape and play in as many games as he can with the Rowdies.

He also wants to be able to move up to higher levels while continuing to play for the Jordanian national squad.

“Always as an athlete, you want to be at the top level,” said. “For me, this goal is important.”

Sports Editor Charles Curcio can be reached at charles.curcio@stanlynewspress.com, (704) 983-1361 or via Twitter (@charles_curcio).