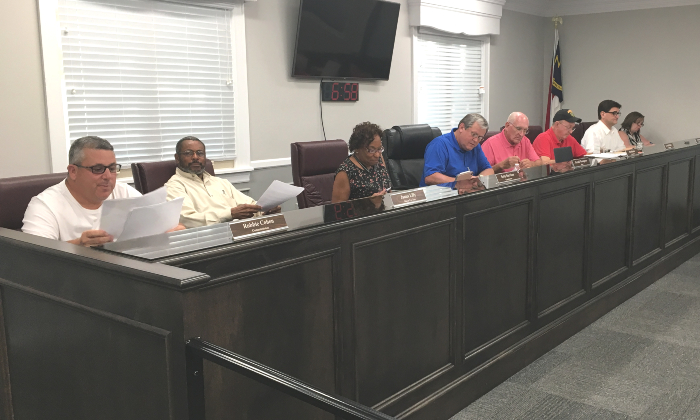 Two Norwood Town Council commissioners differed regarding how best to inform department heads of new policy for how purchases are made by the town at Monday’s meeting.

The draft for purchasing policy was drawn up by former interim town administrator Ray Allen, who was in attendance. Scott Howard was present at the meeting after his first day on the job as the new town administrator.

Before approval, Mayor Harold Thompson asked if the policy needs to contain language stating when the town pays a vendor or contractor those bills will be paid within 30 days.

Howard said he had never seen anything like that in policies in other municipalities, adding “one good thing about government is they usually pay very quickly. So I don’t think it’s necessary.”

Commissioner Wes Hartsell expressed concern about personnel needing to get orders for everyday small purchases, to which Allen said department heads have authorization for purchases $250 and under.

When Commissioner Larry McMahon asked about enforcement of the policy by informing department heads, he asked if Howard, the finance officer and other commissioners may be part of the process.

Commissioner Robbie Cohen said council members do not need to “micromanage” the staff.

McMahon responded by saying “we aren’t micromanaging. We’re looking after the money.” He added: “I don’t care if they like it or not.”

In other policy moves, the Town Council adopted new fine levels for violations of solid waste regulations. Offenders will now pay $500 for the first day of offense and $250 for each additional day.

The council also received a report from the council’s legal representative, Jim Phillips, regarding a review of the town’s code of ordinances.

Phillips mentioned four areas where the review should look at making changes to the town’s existing code, including:

Thompson said the review should look at the issues in the codes pertaining to law enforcement of ordinances “to enable these guys to do their jobs. That’s what we pay them for. If we handcuff them, they can’t do that. We won’t be accomplishing anything.”

Phillips said “the more effort we put into (the review), the more effective it will be.”

Hartsell suggested the review should do “the minimum to satisfy (and go from there),” adding “it will put the bite in the ordinances.”

Phillips agreed to produce a list of changes to the codes before a future meeting. The board agreed changes to the law enforcement portions be done first. Thompson asked if Police Chief  James Wilson to work with Phillips to identify the changes needed.