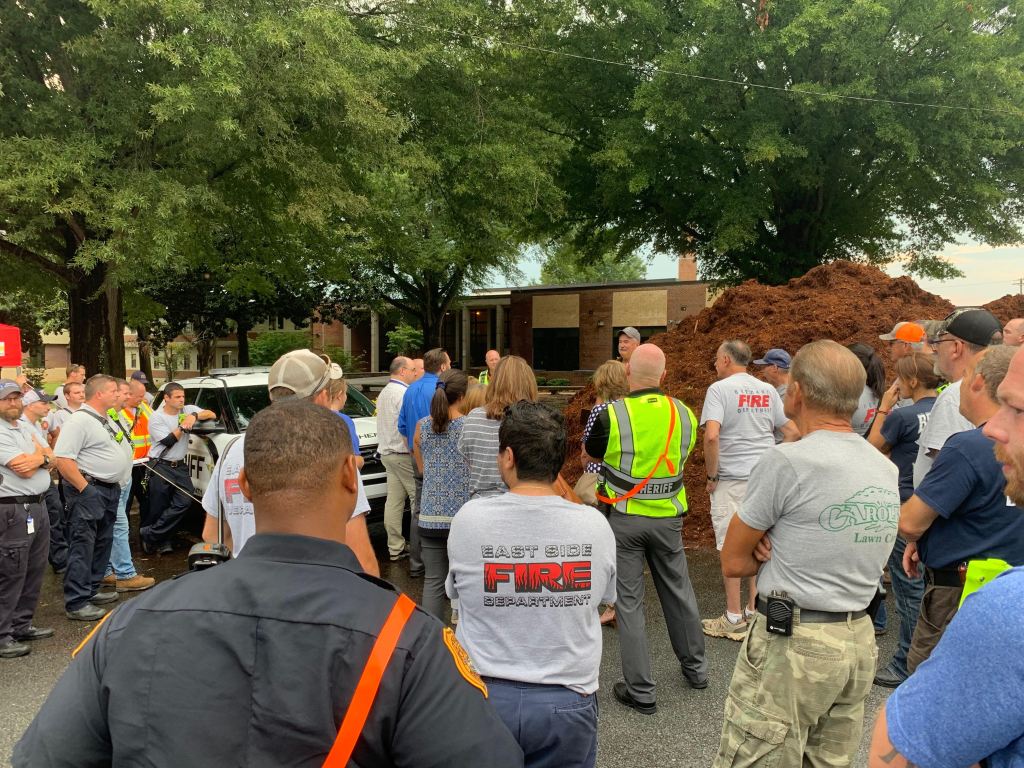 Law enforcement officers and volunteers listen to the safety briefing at an active shooter training at Albemarle High School.

A couple of days before law enforcement officers in El Paso and Dayton responded to mass shootings in their cities, Stanly County first responders descended upon Albemarle High School to deal with a situation of their own.

In El Paso, Texas 22 people died from the Saturday morning shooting. In Dayton, Ohio nine were killed 13 hours later. Dozens were wounded in both incidents.

There was no emergency in Albemarle. However, law enforcement officers were on campus for training as if an active shooter were present.

There have been 22 school shootings in the United States this year, including one at UNC Charlotte in April, where a gunman opened fire in a classroom killing two students and injuring four others.

“It’s just an unfortunate thing,” said Stanly County Lt. John Howell, referring to the school shootings. “A lot of times, the work that we do is reactionary. We’re just training for any eventuality.”

Officers in the county have experience dealing with school shootings. In 2014, police responded to a report of a shooting at Albemarle High School. When officers arrived, they found student Bernard Miller with a gunshot wound on his leg. Miller was transported to the hospital where he received treatment. The alleged shooter, student Jalen Russell, was charged with assault with a deadly weapon.

To help with last week’s training, the sheriff’s office sent emails to students, asking them to volunteer. Students who wished to participate were required to have a signed permission slip from their guardian. During the training, students were used as role players to simulate what to do in the event of an actual shooting.

“I think active shooter training is important, because if something actually happens, we’ll be prepared for it,” North Stanly High School graduate Meredith Simpson said.

A lot of parents wonder what their kids should do in the event of a school shooting. According to Badin Elementary teacher Brooke Davis, teachers are trained to keep their children safe during an emergency.

“We have lockdown drills every month,” Davis said. “We shut everybody in the closet and turn off the lights. Everybody’s quiet. Those are the rules.”

In a few of the school shootings this year, young people have made efforts to save the lives of their classmates. At UNC Charlotte, student Riley Howell tackled the gunman as he opened fire, saving the lives of others. Just a week later, Kendrick Castillo, a student at the STEM School Highlands Ranch in Colorado, did the same thing to an armed assailant at his school. Both Howell and Castillo were killed.

“They were heroic,” Davis said. “You just never know what you’ll do in that kind of situation.”

Davis said teachers in the county are not explicitly told to risk their lives for their students, but she would do everything in her power to keep them safe.

“I would risk my life for them in a heartbeat,” Davis said. “They’re my kids. Well, they’re my students, but I call them my kids because we’re so close.”

When it comes to the way students respond during a school shooting, Howell said there are three options: run, hide or fight. He said students should choose one of these based on what type of situation they are in.

Howell said the decision to fight is something everyone has to make for themselves. He said some people may be more suited to fight, while others will not do so unless they have to. To describe the latter, he used the analogy of an animal, such as a swan, who will not attack unless it feels it is threatened.

“Some people have a warrior spirit in them,” Howell said.

There are other precautions being taken to ensure the safety of students. The school system recently adopted a parent communication app, Sangha, which allows parents to receive notifications directly to their cellphone concerning school activities. According to Davis, state lawmakers are considering a bill that would fund the installment of metal detectors in schools.

West Stanly Middle School Principal Jennifer Huneycutt believes schools should focus more on the mental health aspect. Since there are not enough social workers for every school in the county to have its own, she said it can be difficult to get the help they need.

All students and teachers present at the training agreed it was necessary and vital for the protection of students in Stanly County. One common phrase heard among attendees was “it’s better to be safe than sorry.”

“Don’t think that it can’t happen here,” Huneycutt said. “Because you never know.”