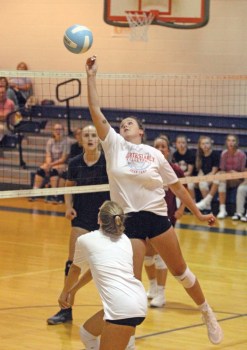 North Stanly's Nicole Lowder goes for a tip at the net at Saturday's jamboree. (Photo by Charles Curcio/staff) 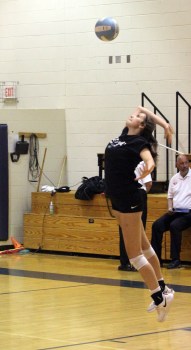 Many of the teams, including Gray Stone and West, used the event as a chance for varsity players to get back into the swing of games while JV players could gain experience and possibly move up to the varsity level.

Kadie Morgan, head coach for the Comets, said she “wanted an exciting way to start the season.” She added she felt “the best way to dive into the season was to bring the county together for a little competition.”

Scrimmages against multiple teams like Saturday, Morgan said, was “a great opportunity for each team to get some extra touches in and to work the kinks out before the season actually begins.”

Based on what each of the teams brought to the floor Saturday, Morgan added “I forsee this season being very competitive. Each team carries some very talented young ladies led by skilled, knowledgeable and supportive coaches. Not only are teams bringing back talented upperclassmen but there is a lot of young talent floating around as well.”

The Comets’ coach also added most importantly she thought the players had fun and the jamboree was a success.