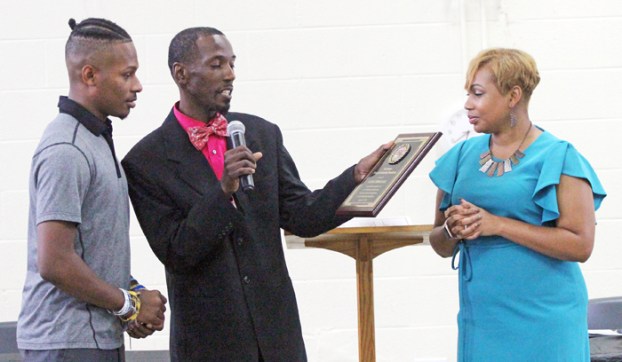 Elijah Threadgill (left) is presented a plaque for winning the 2019 Benson Foundation scholarship. Presenting him with the plaque and scholarship are Williams Benson and Dr. Rikki K. Baldwin. (Photo by Charles Curcio/staff)

A minority need-based scholarship, the Benson Scholarship Foundation awarded a $500 scholarship to Elijah Threadgill, who will attend Fayetteville State University in the fall.

The Kingville Alumni Association also awarded $500 scholarships to Jacobi Lex Emery and Jamyah S. Baldwin, along with a $1,000 scholarship to Benjamin Lenwood Williams.

“Over the last four years I have been very blessed to see the Benson Scholarship grow tremendously,” organizer William Benson said. “I love seeing our community come together for a wonderful cause. I think of giving not as a duty, but as a privilege. Stanly is home and will always be home for me. I love the people here, the school system and the many amazing things Stanly produces in our youth and citizens.”

With the Foundation’s fifth year coming up, Benson said the foundation plans to increase scholarship amounts along with forming relationships with other local organizations to award additional scholarships.

“I am hoping more larger businesses and organizations invest in this great cause so we may help more students,” Benson said.

Special recognition was also given to Lashonda Holmes, the vision coordinator of the College Outreach Ministry at New Zion Baptist Church. The ministry, which gives schools supplies to college students, began in 2017 by giving out supplies to more than 100 students. Including scholarship winners at the banquet, the program has given supplies to more than 200 students this year.

Albemarle Police officer Kim Cook was honored by the foundation for her work in the community as a D.A.R.E instructor and school resource officer. Cook will begin her eighth year as the SRO at Albemarle Middle. She also visits East Albemarle and Central elementary schools.

Cook first worked at the jail where she said she “always treated people with respect and treated them the way I would want my family members treated. I continue to do that today. I don’t care what ethnicity you are. I don’t care what the color of your skin is either. We are all a color and I am color blind when it comes to people.”

She said her wish would be to teach D.A.R.E. (Drug Abuse Resistance Education) at all the schools regardless of grade level.

“When I became an officer, it was to help our community,” Cook said. “My focus is our youth. My kids know I love them and so do their parents, family. It isn’t a job for me, it’s an honor to serve.”

Stanly knife-maker buoyed by success after winning ‘Forged in Fire’