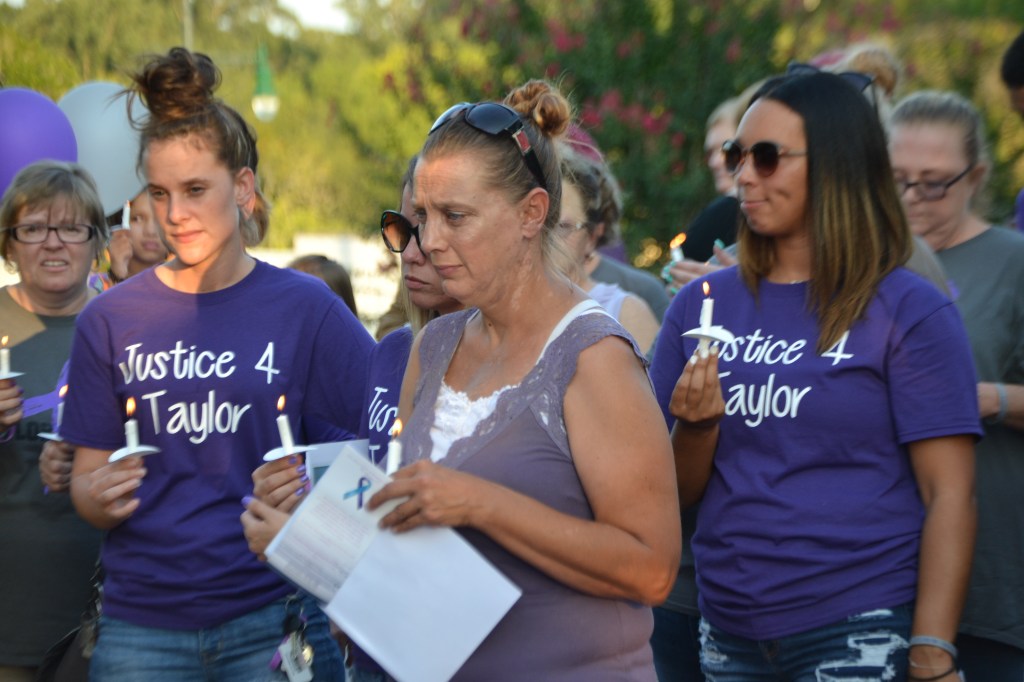 On Friday evening, family and friends of Taylor Liles gathered in downtown Albemarle for a vigil to celebrate what would have been her 20th birthday.

Liles died after she was allegedly assaulted by her boyfriend, LaQuinton Melton, who has been charged with first-degree murder. Melton is being held at the Stanly County jail, less than a quarter-mile away from where the vigil took place. The assault remains under investigation.

“She was a hard worker and a good kid,” Angie Burleson, Taylor’s mother, said. “She was just gone too soon.”

Liles’ family members remember her as quiet and reserved. They said family was the most important thing in her life, and that she spent time with them every chance she got.

Liles was a student at Stanly Community College. Her mother said she had dreams of going to college to become a nurse or a physician’s assistant. She said her daughter spent time volunteering at Atrium Health Stanly to learn more about the medical field.

While attending school, she also worked as a waitress at Applebee’s. Former coworker Caroline Trivett said she saw a different side of Taylor.

“She had a really outgoing personality,” Trivett said. “People normally couldn’t tell because she was shy at first.”

Liles’ family members said she enjoyed playing tennis and experimenting with different kinds of makeup. They said she particularly loved driving to Cook-Out in her white Honda Civic.

According to her uncle, Ryan Liles, her family found out she was abused a couple of weeks before she died. Liles claims Taylor was threatened with harm against her family if she talked about any abuse.

“She would go right back into the hell she was living in because of fear of her family being harmed,” Liles said.

Shawn Reap, Liles’ great-aunt, said she could sense something was up when her grand-niece began dating Melton. She said her attitude changed, and she could tell she wasn’t acting like her normal self.

“I could tell that there was something that wasn’t quite right,” Reap said.

The Liles family is teaming up with Esther House, an Albemarle-based organization that provides assistance to victims of domestic violence, sexual assault and human trafficking, to ensure Taylor’s name is never forgotten. Esther House has been in operation since 2011.

“We will not let Taylor’s voice fade,” said Donna Miller, executive director of Esther House in her speech commemorating Taylor.

During her speech, Miller said one person becomes a victim of domestic violence every 20 minutes, which equates to more than 10 million people a year. Miller said she joined Esther House because she wants to see that number go down.

In the past year, Miller said she has helped roughly 450 people with domestic violence related cases. While most of her clients come from Stanly County, she said quite a few come from neighboring areas to seek help.

“We’ve even had people come from outside of the state,” Miller said.

In response to Taylor’s death, students at West Stanly High School will be required to learn about healthy relationships through a four-part series on the subject, Burleson said.

Burleson said she wants to caution other parents not to wait until high school to teach their children about the dangers of domestic violence. She said it is important to check on your child, and look for any signs of trauma.

“Don’t wait until it’s too late,” Burleson said. “Unfortunately, this is something that will happen to a lot more kids.”