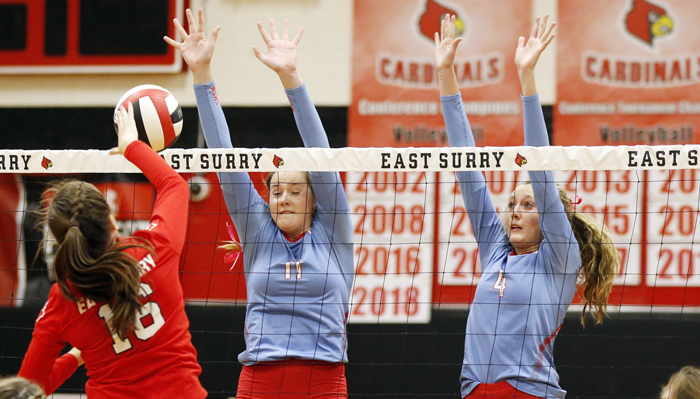 The Comets’ 2018 campaign was one of the strongest in the program’s history, going 18-4 overall and undefeated (16-0) in the YVC. North reached the third round of the state playoffs last season, losing to No. 1 seed East Surry.
The Comets graduated two seniors: Madi Morris and Camille Shelton.

The varsity team “is very solid all the way around,” head coach Kadie Morgan said. “(North is) bringing back strong, talented girls from last year that helped carry us to the third round of states, while also adding some very talented underclassmen.”

This offseason, the team has been working on getting physically and mentally stronger, Morgan said.

The team’s theme overall is teamwork.

“(North) has all the necessary talent to go even further this season,” Morgan said. “I have some of the most driven ladies in the county and with the talent and heart we have on this team, I foresee this season can be even more successful than last year.”

Colts assistant coach Steffi Dutton steps up this season to take the head coaching duties for West. The former four-year starter for

Albemarle played at Bluefield and Guilford colleges and has coached regional and national club teams with the Piedmont Volleyball Club in Greensboro.

The Colts return all of their starting players from last year’s 19-6 team who finished second (8-2) in the Rocky River Conference regular season, won the RRC tournament and reached the second round of the 2A state playoffs.

Abby Efird, a junior transfer, along with rising freshman Cristin Cline are new to the roster.

“The depth we have for our varsity team is better than in years past. We are coming into the 2019 season with more experience and a more versatile group of athletes,” Dutton said.

The Rowdy Rebel Bulls (16-9, 11-5) reached the finals of the Yadkin Valley Conference tournament and the second round of the 1A state playoffs under head coach Eric Laskowski.

This season “will be very challenging,” Lask-owski said. “We will present a lot of different looks in the early part of the season.

Several players will be called on to play different positions from match to match and possibly from set to set.”

Mattie Hinson, the only senior this year, finished last season third in the conference in kills (246) and fifth in aces (40).

“We will rely heavily on Mattie to play multiple roles this season.” Laskowski said.

Other starters returning are juniors Emma Lemons and Morgan Kinley.

“Emma has been impressive hitting from the outside during summer workouts,” Laskowski said.

Kinley finished fourth in the conference with 41 aces.

“Morgan does a lot of different things for us,” Laskowski said.

“She will be called on to lead our defense, play big from the service line. We will look to Morgan to provide offense from the back row.”

Keeli Crisco, freshman setter in 2018, is the only other returning starter.

Amelia Lowder and Maddie Wright are two juniors returning for South. Lowder was the Bulls’ third middle blocker last season while Wright missed the season with a foot injury.

Adryanna Bautista will help to strengthen the defense as a specialist, Laskowski said, while Skye Shankle returns to “provide a strong presence in the middle both offensively and defensively.”

Stella Jones rounds out the sophomores and will be called on to strengthen the offense as a hitter.

The Knights welcome a new head coach this season in Rebecca Carter.

Carter, who played in college at Pfeiffer and was a graduate assistant coach for one season, also coached at North Stanly for a season in the early 2000s and was the Gray Stone JV volleyball coach last season.

She said the Knights have been working hard in the offseason in open gyms and summer weight training seasons with the school’s strength and conditioning coach, Brian Long.

“I am excited to see their hard work pay off,” Carter said.

The Knights went 13-8 and 10-6 in the YVC, winning the conference tourney title and reaching the second round of the 1A state playoffs.

“I am looking forward to their leadership on our team,” Carter said. “The team will be young as many of our players are sophomores and freshmen. I am sure that we are up for the challenges, hard work and success.”

Albemarle will have varsity and JV teams this season despite graduating six seniors from last year’s squad.

Albemarle has scheduled 23 games this season and is looking for one additional match to have the maximum of 24.

“It’s always been important to me to give our girls as much playing experience as possible so I’m excited about the opportunities for our ladies to learn, grow and, of course, become better people through the process,” Wright said.