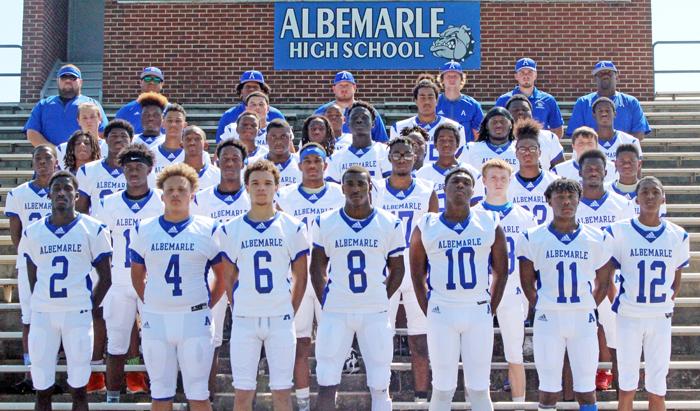 Albemarle head coach Richard Davis enters his third season in charge of the Bulldogs with an 8-15 overall record, having led the team to back-to-back playoff appearances.

But Davis said 2019 “is the year (Albemarle) needs to get back to where we belong.”

Davis said this season is one in which the Bulldogs can contend in the Yadkin Valley Conference.

“Without a doubt, we like our chances. I will take my lineup and put it up against anyone in the conference,” Davis said.

The Bulldogs maintained the same level in wins last season but the differential in those games greatly improved. Albemarle increased its points scored by 88 to finish with 236, while the points the Bulldogs allowed only increased by 15 (to 288). Two of the team’s losses in 2018 were by eight points or less in the first two weeks of the season to Thomasville (8-0) and West Stanly (29-28).

“This season, one of the biggest things we have talked about was finishing…we won four games, but we very easily could have won six. We should have won the first two,” Davis said.

However, the team returns a number of players.

Defensively, Albemarle returns the entire starting secondary from last season along with linebacker Adrian Little, whom Davis called “the heart and soul of our defense.”

On the defensive line, most of the starters return including Brandon Smith, a 6-foot, 270-pound rising junior for whom Davis said he “is expecting to have a monster season” after finishing third in the Yadkin Valley Confernce in sacks in 2018.

Naquain Carpenter also returns on the line for the Bulldogs while freshman D.J. Watkins is a potential Div. I level athlete on the line at 6-foot-2 and 210 pounds, according to Davis.

Watkins “has all the potential in the world,” Davis said, talking about the confidence he showed at a recent N.C. State University camp.

Running the football on offense will still be a stregth of the team, Davis said, but at the same time he knows Albemarle will have to throw the football more efficiently in order to be more successful.

Antonio Burns and Josh Smith are both working at quarterback in the preseason for the Bulldogs, with last year’s signal caller, Manaurian Hall, moving to wide receiver. Both are athletic while Hall “might have the best hands on the team” and gives the Bulldogs a threat at receiver, according to Davis.

With the team’s overall experience, Davis said the Bulldogs have some little things to work on before the Aug. 23 home opener against Thomasville. He said Albemarle has to work on its passing game while not giving up the big play on defense. Davis said he would like to force more turnovers on defense.

With bringing back more players this season, the Bulldogs coach said “they have a little belief. They are starting to have a little swagger to them…we have a chance to be as good as we have been here the last four years.”