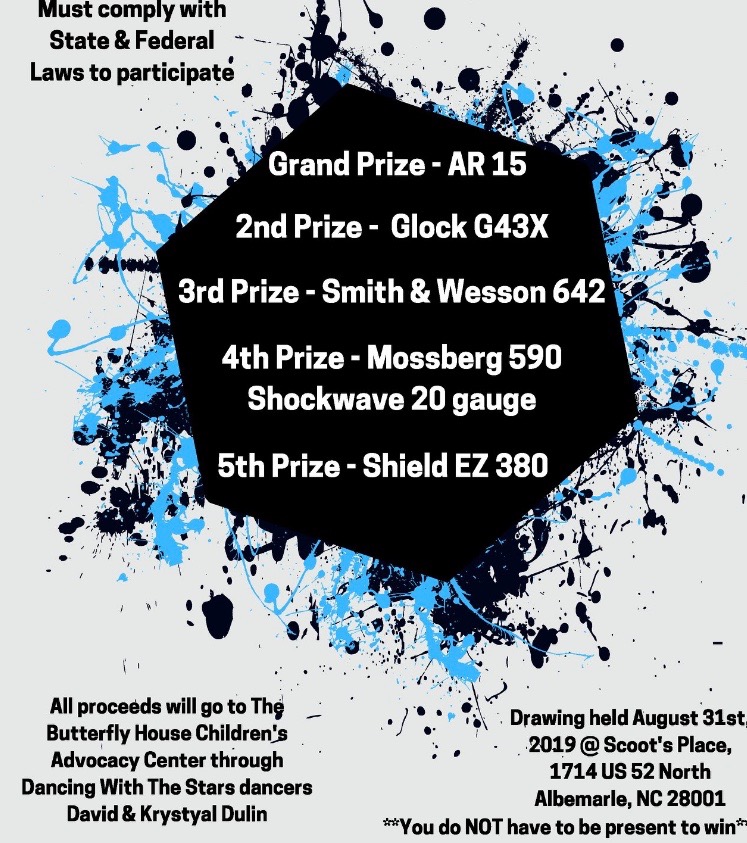 In an effort to raise money for a children’s charity, Albemarle Police Chief David Dulin is promoting a raffle of an AR-15 rifle — the same weapon used to wound six police officers in Philadelphia just this past Wednesday.

Although the AR-15 is not classified as an assault weapon, it has been used in numerous mass shootings, including Newtown, Aurora, Parkland, San Bernardino and Las Vegas.

More recently, an AR-15-type rifle was used by a shooter who opened fire in a Dayton, Ohio nightclub Aug. 4, killing nine people and wounding dozens more.

According to the National Shooting Sports Foundation, AR-15s are not classified as assault weapons because they are not fully automatic. The “AR” in the name stands for ArmaLite rifle, named after the company who created it in the 1950s.

On Monday, a post was published on the joint Facebook account Dulin has with his wife advertising the raffle for Dancing with the Stars, an event that raises money for the Butterfly House, a child abuse advocacy center in Albemarle. The Dulins are partnering with Scoot’s Place, a gun shop in Albemarle.

Tickets for the raffle are being sold for $20 each. The flyer for the event indicates that those interested must comply with state and federal laws to participate.

“People are the ones that kill, it’s not guns,” said Dulin, who has been chief since April and with the department for almost 25 years.

Jane Boone, executive director of the Stanly Health Foundation and organizer of Dancing with the Stars, said this is not the first year there has been a gun raffle for the event. She said AR-15s and other similar weapons have been given away before.

“Teams decide their own fundraisers and the best way that they can raise money,” Boone said. “That’s just one that was chosen.”

The Coalition to Stop Gun Violence (CSGV) is a national organization that has been advocating for gun reform since 1974. Andrew Patrick, media director for the organization, said the gun raffle is an insult to people who have lost their lives in mass shootings recently.

“In the last two weeks, we’ve seen these AR-15s and other similar types of weapons have been used to inflict incredible harm,” Patrick said.

Patrick brought up the Gilroy Garlic Festival shooting in California that occurred a couple of weeks ago, where a shooter opened fire on attendees. Three people were killed, including a 3-year-old boy.

“The weapon was firing for less than a minute,” Patrick said.

“Raffling it off to help a children’s organization just speaks to the level of tone deafness that exists in the community,” Patrick added.

Patrick said the AR-15 is the most common weapon used in mass shootings. He cited the example of the shooter in Dayton, who used an AR-15-type rifle to shoot 26 people in less than 30 seconds.

“It’s used because it’s very effective at killing as many people in as short amount of time as possible,” Patrick said. “That’s a gun that should not be available to the general public.”

The CSGV’s main mission is to persuade politicians to draft, pass and implement evidence-based gun legislation, something North Carolina has done recently.

On Monday, Gov. Roy Cooper signed executive orders calling for the State Bureau of Investigation to update the National Instant Criminal Background Check System. Last year, Cooper asked the agency to look closer at the way the state shares information. Through this effort, more than 284,000 criminal convictions were uncovered that had previously not been reported. Cooper said he hopes this will be a positive step in enacting stricter gun legislation in an interview with the News & Observer last week.

Boone said there are not any plans to remove the fundraiser. If there is an outcry from the public, Boone said officials would take a closer look at the situation.