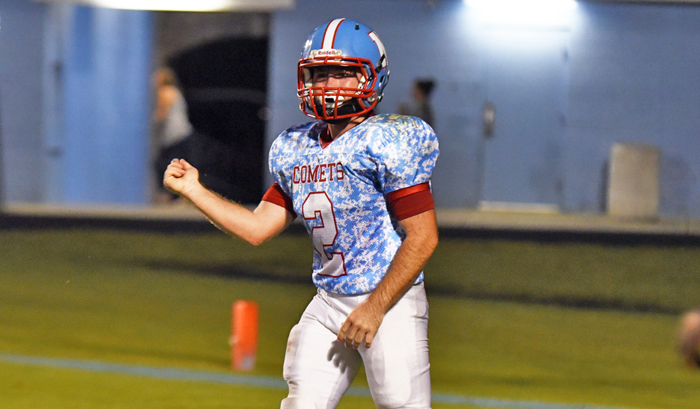 North Stanly's Dylan Eudy returns for the Comets for his senior season in 2019. (File Photo)

The last six seasons for the Comets, two under former head coach Ralph Jackson and three under current coach Scott Crisco, has been the most successful of any stretch for North Stanly football.

North enters 2019 having posted six straight winning seasons with a 54-21 overall record, posting a program high with 11 wins last season to three losses. The Comets won back-to-back playoff games for the first time in school history reaching the third round of the 1AA state playoffs, losing to eventual state champion Tarboro on the road, 28-0.

“I think we would have won the West (region),” Crisco said about the 2018 playoffs, where the Comets, who normally play in the Western Region, were the fifth seed in the East because of the geographical procedures used by the NCHSAA

Crisco passed Lonnie Chandler for all-time wins in 2018 setting a school record as well with 11 victories. His 36-14 head coaching record and win percentage (72 percent) are both school records. North also set a school mark with 590 points scored, averaging 42.1 points per game, while the 111 point allowed by the Comets was seventh best all time in school history.

With big losses to the team from graduation, the Comets, ranked ninth overall by Carolina Gridiron in a recent preseason poll, have a lot of positions on both sides of the field to fill.

“It’s going to be a challenge. We knew this time was going to happen that we were going to lose those guys,” Crisco said, adding the team will have a lot of freshman and sophomores on the varsity roster. At times, he added, the next man up for the Comets may not have ever stepped on the varsity field.

Defensively, the Comets lost N.C. State signee C.J. Clark on the line and the team’s five leading tacklers including Drew Little, who joined the North Carolina Tar Heels this season as its longsnapper, along with lineman Garrett Clark, linebacker Carter Terry and defensive back Colby Russell.

“When you lose three D-I players and five D-II players, you can’t just replace that. We are in the same boat a lot of 1A schools are; we just haven’t been there in a while,” Crisco said.

However, Crisco added, many of the players who will be starting this season have gotten a lot of playing time over the last couple of years. He admitted the team may be inexperienced in some spots, but some of the team’s defense, especially the defensive backs, has had some experience.

The defensive line has some returners and the team had to play without Clark for the last five games of 2018. This season, though, the linebackers for North’s defense will be new, Crisco said.

“We thought (playing without Clark) would be the end of the world. It turned out to be a blessing for us because we had two guys in his spot getting starting experience,” Crisco said.

At running back, junior Christain Barber looks to take over as the team’s starter. Crisco said Barber would have started last season had the team not have Rhone or Davis in the backfield. Barber started for the JV team last season.

Luke Shaver moves up from the JV team last season as the team’s new quarterback. Crisco said Shaver “is super smart and reads coverages well” and recently finished second among others in his class at a QB camp at Duke this summer. Crisco added “he has everything but experience.”

Joseph Benfield, who played for North last season as a slot receiver, moves to the outside wideout position this season.

One of the strengths of the team, according to Crisco, will be the team’s conditioning which has been a point of pride for the team in its recent years.

Looking ahead at the season, Crisco said “everybody’s going to underestimate us and that’s fine. We’re not going to be the dominant team we were across the board.” He added the team has quality players who have some experience but have been “waiting in the shadows” for their chance to start.