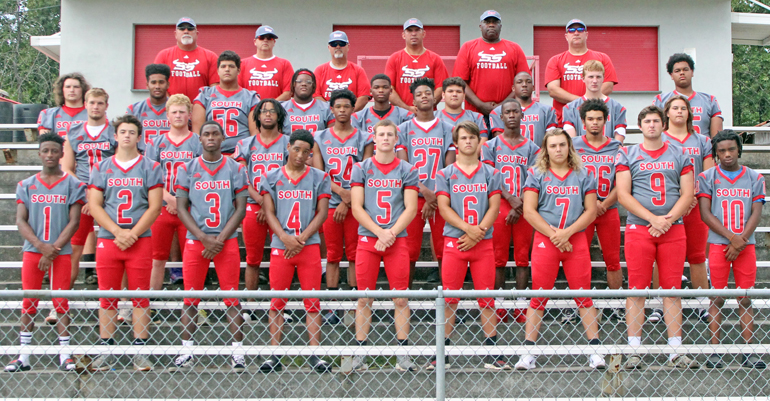 Under first year head coach Ryan Ochier, the Rebel Bulls achieved several goals in 2018. South finished above the .500 win percentage along with winning a playoff game for the first time since 2012.

“It was a very successful season in my eyes in many ways not only with wins on the field but what we turned out after the season with kids going to college playing football,” Ochier said.

The overall point numbers for the Bulls also improved. South scored 364 points in 2018, an improvement of 99 points good for sixth overall in school history.

On the defensive side, South reduced its number from 299 to 264 in points allowed, 64 of which came in a second-round playoff loss to eventual state champion Tarboro.

This season, the Bulls graduate 22 seniors from 2018 with some key losses on the front lines as well as on defense. South returns five starters on offense but just four on the defensive side.

“I was pleased to have the group of seniors that I did. They bought in quickly and never let up,” Ochier said.

The Bulls added eight juniors “from recruiting in the hallways” so this season South has 15 rising seniors playing football. With 16 juniors on the squad, the team is balanced age wise between the two classes.

Regarding the offense, Ochier said “now that we have a feel for what we have coming back, we have a great idea of where to go…we’re going to open it up a little more.”

South returns a talented quarterback in senior Jaquez Cooke. Despite missing three games, Cooke was still among the team’s leaders in rushing yards and touchdowns along with leading South in passing yards and TDs.

Ochier said Cooke “has to be on the field. He’s that it factor that most teams drool over.”

The quarterback position also got a boost with a West Stanly transfer, Harrison Montgomery. A bigger sized player at the position (6’3”, 240 lbs.), Montgomery could see time at both QB and tight end, giving South the flexibility to use Cooke in other roles like running back or wide receiver.

Ochier said Montgomery has a tremendous skill level and he possesses “a great arm and great knowledge of the game. He knows exactly what he needs to do. He’s great at reading defenses.” Montgomery will also play somewhere on defense possibly as well.

The team’s leading rusher in yardage (685) and touchdowns (8), rising senior Marcus Green, returns for South this season as well. Ochier said “pound for pound he’s probably the strongest player on the team. He’s not afraid of contact but he can make a move on you if he needs to.”

South also will have Jaquavius Caraway at running back moving up from the JV level last season along with new H-back Jadarian Smith who transferred to the school last last academic year from Anson County. Justin Gaddy can play at several skill positions for the Bulls as well this season.

One place on offense the team was hurt by graduation was at wide receiver with the graduation of leading pass catchers Tori Colson and Tony Loftin.

Defensively, South lost eight of the team’s top 10 in tackles including linebackers Joey Dorko along with the Morton brothers, Luke and Seth. The Bulls’ front three of Jitavis Huntley, Cade Whitley and Davis Moose also graduated. South also graduated a talented defensive back in Rodney Hammond.

Ochier said Huntley’s presence on both the offensive and defensive lines will be missed this season adding “every coach I’ve talked to said he was a presence they couldn’t block.”

The lines are not as sizable this season, Ochier said, as the team goes from averaging 280 pounds on the lines last season to around 220 this year. Colby Almond will be a huge mainstay for South at left tackle this season.

South’s head coach said the team is looking to open up the offense a little more instead of being more physical downfield run blocking.

Defensively, the package and scheme are the same, with South’s 3-5 looking to bring pressure from multiple angles on every play.

“We already have our entire defensive playbook in. We are not adding anything else. The kids that have been here all summer have picked it up. The kids who were here last year remember it,” Ochier said.

South’s coach said he “doesn’t want to be conceited” but he is “very comfortable” with where the team is at heading into Friday’s opener at home against Southwestern Randolph.

“We have a good shot to compete. We were top three last year. I think we will be in that top threshold again,” Ochier said regarding battling for the Yadkin Valley Conference title.

In terms of the county title, which South has not won outright since 1989, Ochier said in his opinion it could come down to between themselves and West Stanly. The two teams play October 18.

Putting South’s name on the Stanly Cup, which has been awarded since 1993, has always been a goal for the Bulls, Ochier said.

“We want to be on that cup…if we can maintain up front (on the line) we can control what’s on the outside.”