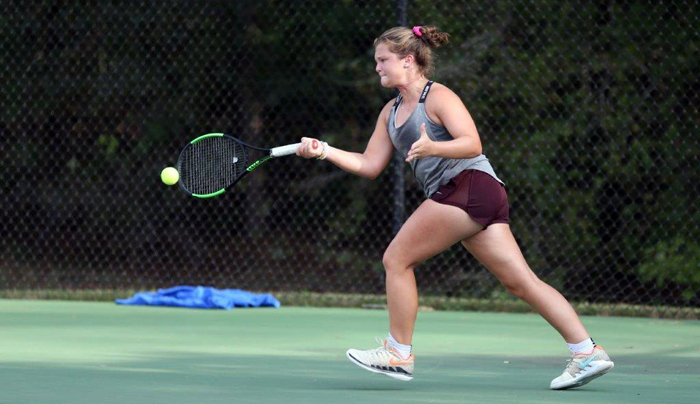 The Knights were undefeated in the Yadkin Valley Conference in 2018, going 17-2 overall and losing in the third round of the 1A dual team playoffs.

Gray Stone returns one of the top players in the state in two-time 1A singles runner-up, junior Emma Grace Bost, who was All-YVC, All-Region and All-State. The Knights also return another All-Conference selection in senior Mia Taggart.

“I am excited about this team of experienced and new talent,” Bost said. “I look forward to watching our ladies improve…I have high expectations.”

West finished 12-3 overall and 7-1, winning the Rocky River Conference under third-year head coach Vanessa Shields. The Colts also had a doubles duo and one individual play in the 2A regionals.

Shields said she is proud of the team’s work. West “looks to a favorable season,” adding the Colts “hope to add” to last year’s success.

The Comets finished second in the YVC in 2018, going 16-3 overall and 14-2 in conference matchups. North lost in the second round of the 1A dual playoffs.

Haley Isenhour will be in the running for a starting position. Others returning to the Comets include Maddie Waggoner, Maddie Smith and Emma Shue.

“The Comets look very strong at this point. They’ve worked on their strokes and fitness throughout the summer, and are ready for a great season,” Napier said.

The Bulls under head coach Carla McSwain went 12-4 overall and in league play finished third in the YVC in 2018.

“Our goals this year are to improve on our third place conference finish and hopefully qualify some folks for the regional tournament,” McSwain said.

In the first season under head coach Vivian Bridges in 2018, the Bulldogs won two matches.

Returning for Albemarle are sophomores Itza Ochoa (1); Hailey Bird (2), Allison Little (3) and sophomore Natalie Sedano (4). Ashley Barcenas is an incoming freshman who will be at the No. 5 spot for the Bulldogs.

Karmalan Wilder is team captain, a junior whom Bridges said the team is “grateful to have back after a serious car accident.”