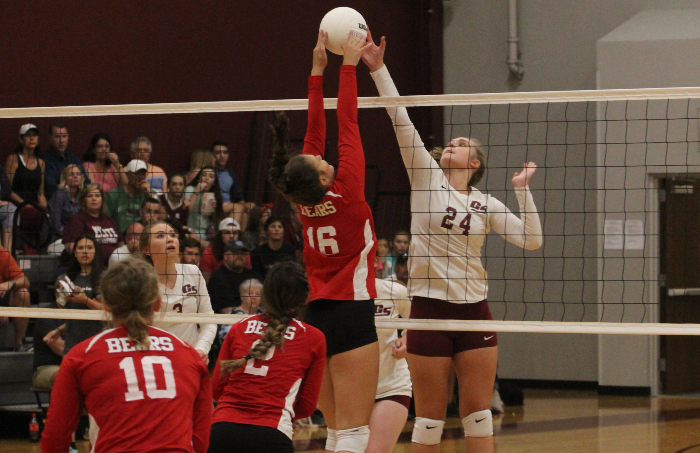 Gray Stone freshman Piper Mauldin battles for a 50-50 ball at the net in the Knights' home win Thursday over Chatham Central. (Photo by Charles Curcio/staff)

In front of a loud, student section counting out each time the visitors hit the ball, the Gray Stone volleyball team moved to 2-0 on the season with a three-set home set win Thursday over Chatham Central.

Head coach Rebecca Carter said the enthusiasm shown by the Knights’ student section was wonderful, adding the young team and the fans have a rapport with each other going back to time in the middle school. Gray Stone has three freshman on the varsity squad in 2019.

“(The fans) want to see this team be successful. So I think that’s a lot of it, being the first home game,” Carter said about the fans.

A sense of team unity along with the feelings from the fans is the environment Carter said she and the coaching staff are building.

Gray Stone took a big lead in the first set, 23-10, but the Bears (0-2) rallied to within three, 23-20. On the final point, Chatham’s attack attempt went wide, giving Gray Stone a two-point win.

Freshman Piper Mauldin finished the second set with a kill in the middle for another two point win, then the two teams battled into extra points in the third set.

Carter said the team pushed hard at times but at other times there are things on which the team needs to work. She added if the Knights continue to play as a team and be about the team over self, Gray Stone “has a lot of potential.”