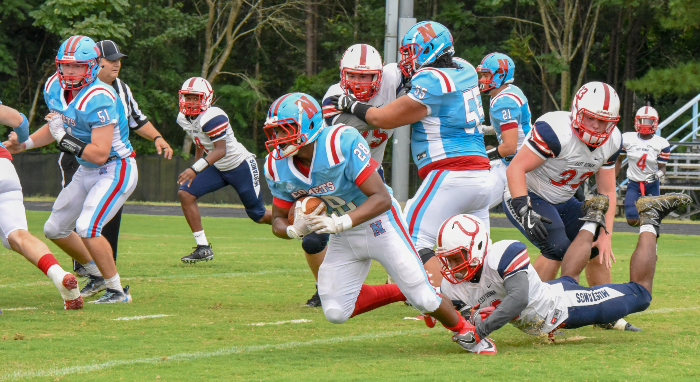 A myriad of penalties along with two early mistakes led to a 33-12 loss for North Stanly in the football team’s 2019 opener against East Rowan.

The Comets had 13 penalties in the game for 113 yards which head coach Scott Crisco said likely took off around 14 points off the board for North.

“We shot ourselves in the foot,” Crisco said.

At one point in the game, North’s head coach called time out for North and was in an animated conversation with officials.

North had a bad snap on a punt on the first possession of the game which set up the first of two touchdown passes for East quarterback Logan Forbis in the game. Forbis was 7-for-11 for 86 yards through the air.

Comets sophomore quarterback Luke Shaver threw two interceptions, one in the first quarter which Tahj Young returned for a 30-yard touchdown for the Mustangs. Shaver completed 6-of-13 passed for 92 yards.

“It’s what we expected,” Crisco said. “A sophomore quarterback, first time playing varsity (with) three new receivers that never played before with us.”

He added the new passer and receivers “are gelling, finding out their spots.”

Christian Barber led the Comets with 91 net rushing yards on 24 attempts with both of North’s touchdowns in the game.

Crisco said the line did well for the most part in the game. He added he was proud of his “young team” for showing heart.

“We didn’t give up. We kept playing. Nobody was complaining. Everybody was upbeat. I can coach that,” Crisco said.

North hosts Piedmont on Friday. The Panthers’ game with West Stanly Saturday was cancelled due to field conditions at West.