Casting her way to a college scholarship 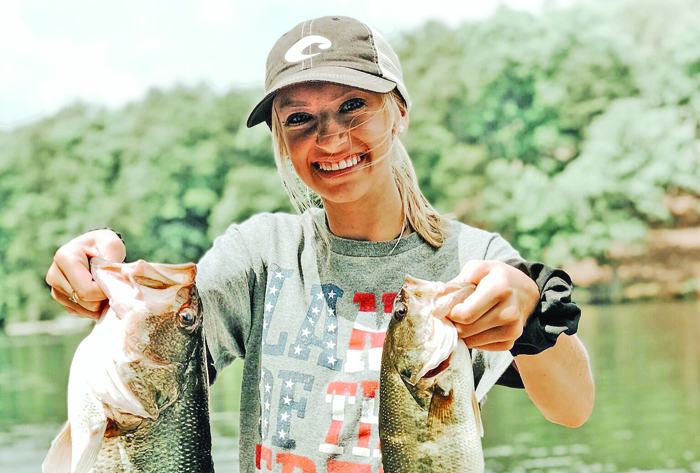 Richfield’s Macey Miller shows off two bass on one of her recent fishing excursions. (Contributed)

Competitive bass fishing has been a male-dominated sport for many years but the times are beginning to change as more women become involved in the sport.

One Richfield woman has progressed in her prowess at bass fishing as to earn a scholarship to compete at the college level.

Macey Miller, a homeschooled student, will be studying at Erskine College in Due West, South Carolina, and will be there in part with a scholarship for the school’s new co-ed bass fishing team.

Miller will be competing along with her teammates in the first year of the new program at Erskine at the varsity level. The school previously had a club fishing team in the previous academic year.

More than 600 schools have fishing teams with most competing at the club level.

The Fleet are scheduled to participate in the FLW College Series and the Bass Pro Shops Bass Fishing Series. The teams will also compete in the spring in the Collegiate Bass Fishing Championships.

Miller did not intend to get into fishing but did years ago when her father needed a fishing teammate after losing his regular partner.

“He couldn’t fish by himself and he was really upset about it. So I said I would be glad to try it out and help (him),” Miller said.

The two, along with younger brother Luke, created Long Creek Anglers, a group which makes T-shirts along with posting fishing videos and photos on Instagram and YouTube.

The new Erskine freshman said her family got into fishing in a big way, something she admits she did not have a clue she would enjoy so much.

“It’s been a get-go for me. I absolutely love it,” Miller said.

After participating in several tournaments, Miller was contacted by Ryan Teems, the new head coach of the Erskine squad, through a phone app called Bass IQ, about her joining the team and receiving a scholarship for her efforts.

The Erksine coach “was all for getting me here. At first, I was like ‘I don’t know’ because first of all I had no clue I would be fishing. On top of that, I could get a scholarship? It did take me some time to wrap my head around it,” Miller said.

Having fished at the high-school level, Miller said she knows the college level are very different, but competing along with her younger brother “has definitely pushed us to compete and be competitive in the sport.”

Fishing is more than luck, she said.

She credits her scholarship to Erskine from learning from Luke. 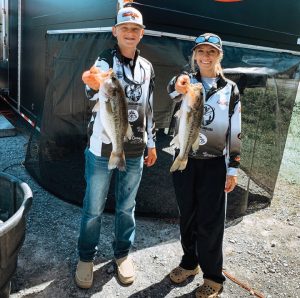 Macey and her younger brother, Luke, show their catches from an event. (Contributed)

“He is so good at fishing. I learned everything from him and I’m continuing to learn.”

Her faith in God has also been paramount in her fishing and her life, Miller said. She, her brother and her father and boat captain, Jody, would pray before each tournament.

“We still continue to do that. We can’t get through it without praying to God and asking him to give us the strength, the ability, the knowledge,” Miller said.

In many cases at those tournaments, she was the only girl fishing which led to some awkward moments.

“And they would look at you like, ‘OK. Why are you even here?’ Like I wasn’t taking it seriously which I am. I’m putting forth the effort just as much as everyone there,” Miller said.

The naysayers have encouraged her to become even better at fishing, she explained.

“I push myself even farther during the tournaments. Throughout the season I saw more girls fishing and that made me so happy. It’s not just a guy’s sport. Girls can do it, too.”

She also hopes to be a role model for other girls wanting to fish and earn scholarships as well.

“I encourage girls to go for it. Do not hold back; push yourself. You can get there with God,” Miller said.

Being homeschooled sometimes has led to her being labeled as quiet, but she said the drive needed to finish her studies being schooled at home “can help you in whatever you’re trying to achieve.”

Her father said Macey’s success in fishing and the scholarship have been “overwhelming” adding “for her and my son to be able to go fish, take pictures and videos and get people to like them” has been very special as well.

The next four years will be about her studies, but Miller said she would love to be able to fish on the pro tours.

“Getting out there and making a name for yourself could definitely help me to achieve that goal,” Miller said.

She added she “has a lot to learn but I am all for it.”