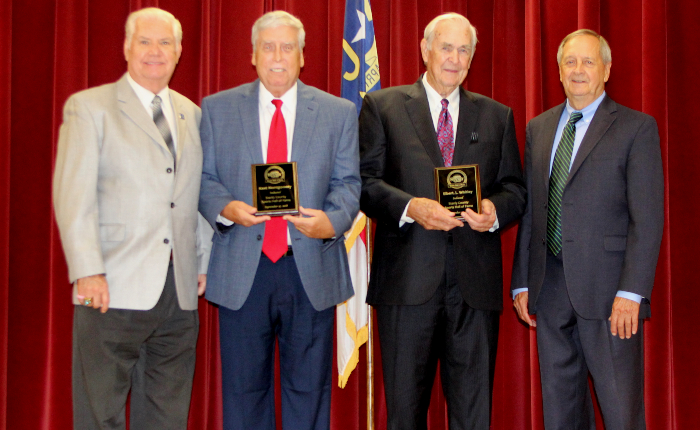 The 28th annual Stanly County Sports Hall of Fame Banquet was delayed a year due to hurricanes last September, but the tradition continued Monday night as H. Kent Montgomery and Elbert L. “Whit” Whitley were inducted in a ceremony at the Atrium Health – Stanly Family and Education Center.

Toby Thorpe from the Hall of Fame’s committee spoke about the future of the hall of fame, noting the display containing memorabilia from previous inductees has been moved to different places over the years and was becoming a sizeable display.

A standout pitcher at Albemarle, Montgomery was introduced for induction by Harris, who quipped he knew that “because I’ve got the gnarled fingers to show for it trying to catch him.”

The third brother from the Montgomery family to be enshrined in the Stanly Sports Hall of Fame, Kent joined his brother Don (1990) and Monty (2002).

“Don was a much-better gifted, all-around athlete then I could have ever dreamed to be. Monty was a better pitcher then me. But they were righthanders. I’m a left hander. I found my niche,” Montgomery said.

He recalled being recruited to Wingate, then a junior college, by telling the coach he was “going to be the best left hander you’ve got.”

He recalled playing with Wingate with another player who went on to a legendary coaching career in the college ranks at Florida State, Mike Martin.

Becoming the first Wolfpack pitcher to finish with an earned-run average under the one-run mark (0.94, ranked third best in 1965), his mark stands as the second-lowest all-time ERA in N.C. State history.

He signed a professional baseball contract with the San Francisco Giants, saying it was for “$1,000, two hot dogs and a Pepsi” but he was soon drafted into the U.S. Army.

“Uncle Sam wanted me more then the Giants did,” he said.

Stationed in Korea, his baseball prowess came to the attention of his superiors at the Army Support Command, where he led the team to the 8th Army championship while stationed in Korea.

His degree from N.C State was earned through baseball, which he called “my vehicle to get my college education,” led to a 37-year career with the Parks and Recreation department in Wilson, eventually becoming its director.

One of his projects in Wilson, which he said would not have happened had it not been for the collaborative efforts of Stanly’s broadcasting legends, Harris and the late Woody Durham, was the North Carolina Baseball Museum, which now resides at Fleming Stadium, the home of the Coastal Plain League’s Wilson Tobs.

But, Montgomery said, he never forgot about playing for local teams like the Wiscassett and Richfield Spinners, or the sacrifices his parents made for himself and his siblings.

His mother, Hazeline, who recently turned 97 years old, was in attendance. Kent thanked his mother saying he would “never be able to pay you back” adding he and his brothers “hope we made you proud with our lives.”

Montgomery also thanked the many members of his family in attendance, along with his brother and co-Hall of Fame member Monty.

The former mayor of Albemarle, Whitley talked about his college recruiting process while playing football for legendary Bulldogs head coach Toby Webb, whom he called a second father.

He and teammate Ed Patterson were co-captains of Albemarle and both received offers from UNC and South Carolina.

Both had wanted to go to Chapel Hill first, but before they accepted, Webb said he had promised to bring both for a visit to Duke

Patterson had also agreed and the two were to be roommates but the next morning Whitley woke to find the other bed had not been slept in and his clothes were gone. Patterson’s brother, Bob, came in the night to pack up his brother’s things and bring him back to Chapel Hill.

“And we wound up playing against each other,” Whitley said.

The former mayor also spoke about playing against Wake Forest lineman Bill Bartholomew, saying he and a teammate were encouraged to try to get rid of him.

“Boy we were just hammering his head. We were just pounding him and we were so proud, we didn’t know what to do,” Whitley said.

“I don’t know what happened but all of a sudden I couldn’t see. I was lying in the grass and they stopped play.” He went on to describe how part of his eyebrow was hanging down over his eye saying “it’s not supposed to do that.”

Whitley said he went back in the game but had to use a helmet with a face mask, but if one played with a face mask it was only because “that just meant you couldn’t take it.”

He went back out and hammered on him again but eventually ended up with about “40 or 50 cleat marks on my back” adding whenever Bartholomew got the chance Whitley “became part of the turf.”

Whitley thanked the committee members for his induction saying it made him and his family proud to be in attendance Monday night.