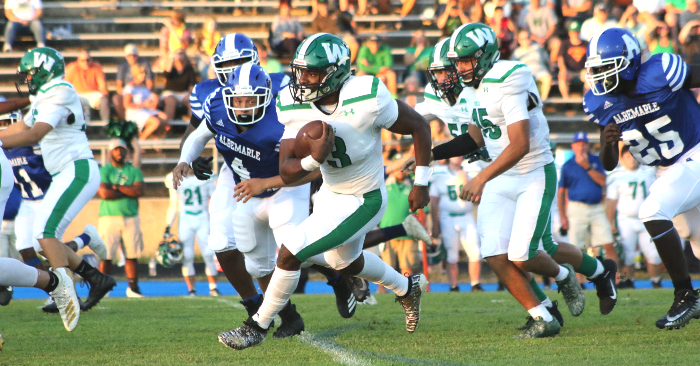 West Stanly's Jordan Poole gets free in the middle of the field in the game at Albemarle in 2019. (Photo courtesy of James Brown)

West Stanly’s second season of running the double-wing offense finally got to open Friday night on the road at Albemarle.

NCAA Div. I recruit Jordan Poole opened his junior season with the Colts with a big night running the sweep out of the formation.

Poole rushed for 197 yards on only 14 carries averaging 14.1 yards per carry including two long first-half touchdown runs as the Colts won 36-20 over the Bulldogs (0-2).

He credited his teammates for their offseason work including the offensive line.

“We have been working hard in the weight room, trying to get a little faster off the line,” Poole said. “You could tell it showed. I’m really proud of the way (the offensive line) played tonight.”

In the scheme, Poole ran in motion towards a spot behind quarterback Jordan Manshack who can then either pitch the ball to Poole or throw a short swing pass to him. He was targeted twice in the flat through the air, hauling in one pass for 24 yards.

“I’ve been working a lot on that in the weight room this summer trying to improve my burst,” Poole said.

He added he has seen improvement in his own game to this season, feeling like his maturity level on the field has grown.

West amassed 417 total net yards in the game including 317 rushing yards on 37 attempts.

“(Albemarle) gave us a front we were comfortable blocking,” West head coach Brett Morton said. “We executed pretty well in the first half. (Albemarle) made adjustments in the second half that we have to get better at.”

Morton also said West came out strong being more comfortable in the offense then last season.

“It was good to get rolling but we made a lot of mistakes,” Morton said.

Poole’s first touchdown came on his first carry of the game, a 43-yard sweep around the left side of the West line early in the first quarter.

Albemarle answered with a 65-yard scoring drive starting with a long pass from quarterback Antonio Burns to wide receiver Josh Smith. His brother, Julius, finished the drive five plays later to put the Bulldogs ahead for the only time of the night for the hosts, 7-6.

Logan Little added a counterpoint to Poole’s rushing game with 53 yards including a 25-yard first-quarter touchdown putting West back ahead by seven including a two-point conversion.

Poole’s second touchdown came with just under nine minutes left in the first half to put the visitors up, 20-13.

Albemarle twice kept the game close on kickoff returns for touchdowns. Jaquavius Simon went 78 yards to get the Bulldogs within one point in the second quarter, 14-13, then Julius Smith tied the game 20-20 on the initial kickoff of the third.

West then got back on top with consecutive scoring drives including a Manshack touchdown run where the junior leapt over Albemarle defenders on a bootleg right.

Cole Carter added a late touchdown after Poole briefly was injured and came out of the game. He return to haul in the two-point conversion pass which put the Colts up by the game’s final margin.

Albemarle travels to Mountain Island Charter in Mount Holly this Friday. The Raptors won over Christ the King 80-0 Friday.