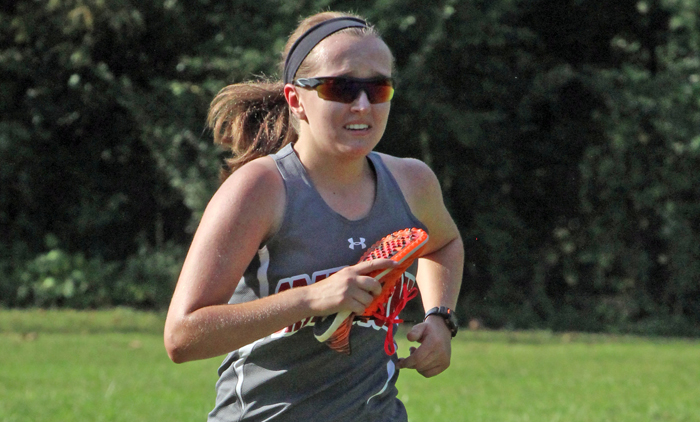 Gray Stone's Sara Bruinsma fights through the pain of the last few meters of Tuesday's cross-country meet holding her left shoe in her hand. (Photo by Charles Curcio)

Running cross-country takes a physical toll on the body as athletes basically run at multiple 5K races every week.

In the course of Tuesday’s Yadkin Valley Conference meet between Albemarle, Gray Stone, North Stanly and South Stanly, one athlete showed her heart and passion for the sport.

Sara Bruinsma, a senior for Gray Stone, was not the top finisher overall or for her team, but gave the other runners, coaches and fans in attendance at Chuck Morehead an example of her dedication.

Finishing up her 5K, which she ran in 32:17 to place 10th overall, Bruinsma had to run the final leg of the race around the basketball court and up to the tennis courts and back with her left shoe in her hand.

A blister the size of a quarter developed on the ball of her left foot, but she managed to fight the pain and exhaustion of the race to finish.

Just past the finishing line, she collapsed onto her back and cried out in pain as trainers and coaches rushed to her aid.

During the last leg of the race, she said afterwards, her feet went numb but she still had as a goal to finish under 30 minutes and be one of the top finishers for the Knights.

“I didn’t want to let (my teammates) down,” Bruinsma said.

Jean Holman was first overall and for Gray Stone with a 26:28, followed by North’s Lexi Goode (27:14). Gray Stone also took third and fifth as Krystn Kirkpatrick and Jenna Freeman finished in 27:39 and 29:50, respectively.

Comet runner Milena Hernandez finished just ahead of freeman in fourth with a 29:34.

On the men’s side, South Stanly freshman Ranfere Garcia  finished well ahead of North’s Koby Poole for first place in 20:10 Poole overcame two runners in the final lengths of the race up to the tennis courts and back down to take second in 21:04.

For the team event, South took first with 23 points followed by North (55) and Gray Stone (56). Albemarle did not have enough runners finish as a team to qualify.