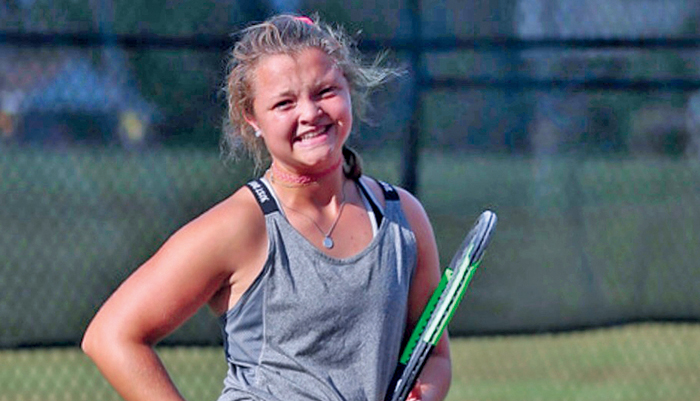 This week’s Gold’s Gym Athlete of the Week, Gray Stone’s Emma Bost, has been the runner up in the state in the 1A singles tennis tournament for the past two seasons.

1) Who is your favorite athlete and why?

My favorite athlete is Roger Federer. This is probably not surprising.

There are several things about Roger that make him my favorite. First, he works incredibly hard.
Second, he has one of the best mindsets in the game.

He is confident but positive and polite, which is huge in tennis where your mental game must be just as strong as your physical game.

She is a big inspiration in my life because she understands how to keep her head held high while following the Lord, even when time are rough.

3) What is your biggest superstition or ritual with your sport?

I don’t have many superstitious beliefs, except when I’m on the tennis court.

However, unlike Rafael Nadal, I do not have the same superstitions with every point or even every match.

For instance, if I have a really good point, and I bounced the ball three times before my serve on that point, I will do that again the next serve.

Also, when I lose a point, I’ll try to go back to the fence and get my towel to give me time to regroup my thoughts.

Like most kids my age, I’m sure I spend too much time on it, but I really like to connect with people near and far.

However, there are times that I would like to see how the world would look if social media were to just disappear.

5) My long terms goals after high school are …
My primary goal immediately after high school is to play tennis on a collegiate team. I’ve dreamed and worked for this almost my entire life. I want to play college tennis for 2 reasons: