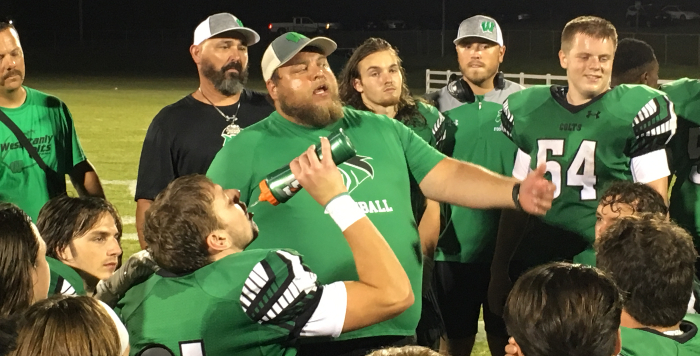 The West Stanly double-wing offense, a run-oriented approach to football, was on display Friday night in a big way for the Colts in a home matchup versus the 3A Southwestern Randolph Cougars.

Jordan Poole continued his strong start to the season at running back for West (2-0) with 267 yards on 12 carries and a touchdown, averaging 22.2 yards per carry.

The Colts scored on seven out of eight total drives in the game, including six rushing touchdowns and one Jordan Manshack touchdown pass to Logan Little. Manshack added 57 passing yards completing 5-of-9 passes to give West 590 total yards of offense.

Manshack credited the offensive line’s efforts in the game for the yardage totals.

“We would not be a team without them. (The line) means everything to us,” Manshack said. “With Poole in the backfield and the holes opening up, you can’t stop us. (The score) says a lot. We’re hard to stop.”

“Those guys up front got off the ball tonight and moved people around. Being the second year in this offense, (we are) getting a little more comfortable,” Morton said.

The timing of the team on offense is improving, but Morton said the team has to avoid dumb penalties.

“We’re not perfect by any means. We have a lot to work on,” Morton said.

The junior quarterback, in his second varsity start, talked about what was important to the team moving forward to next week’s road game at North Stanly (0-2).

“Don’t be cocky. Keep our heads up and keep on (being) how we are.”