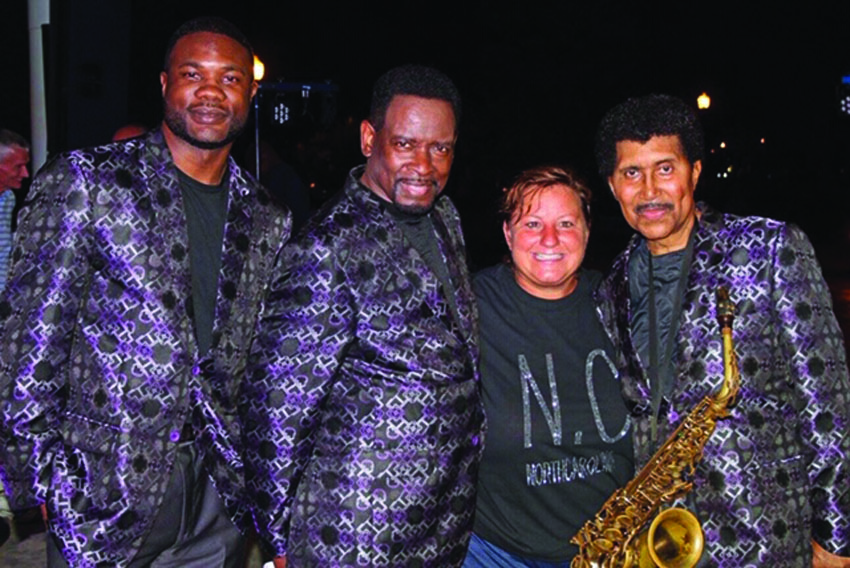 Kim Ingold, second from right, is joined by members of the Chairmen of the Board. Ingold, who died Saturday, was a big fan of beach music and became known in the beach music community. (Contributed by Ken Knox)

Kim Ingold spent her final days doing what she loved.

She attended a concert Thursday night, Hootie & the Blowfish at PNC Music Pavilion in Charlotte.

She cheered on her beloved N.C. State Wolfpack as the team gained a 41-0 victory over Western Carolina Saturday.

Stuck in the middle was a celebration of her 50th birthday on Friday, one where hundreds of friends and family members wished her well on this landmark day.

If she received hundreds of well wishes upon her birthday Friday, thousands more comments piled onto her Facebook page Saturday and into Sunday as word spread of her death.

Ingold died Saturday afternoon on her way home from Raleigh in a three-car collision near the Montgomery-Moore county line.

She was killed when her Mazda was hit head-on by a Hurley Backhoe Services septic pumper truck driven by Bethany Haywood, 28, of Troy, according to N.C. Highway Patrol Trooper N.J. Talley. Prior to hitting Ingold’s car, the truck sideswiped a Nissan Altima driven by Tiffany Jeffries, 43, of Raleigh, Talley said.

Haywood was around 1.7 miles east of Biscoe traveling east on N.C. Highway-24-27 when she crossed left of center, hit Jeffries’ car and then Ingold shortly after 3 p.m., Talley said.

When Talley interviewed Haywood, she said she didn’t remember what happened.

Haywood had a broken left ankle and minor injuries, Talley said, while Jeffries and her brother were uninjured.

Ingold was traveling alone after the Wolfpack victory.

However, as evidenced by the many comments online, she did not travel throughout life alone. Students shared memories of how she impacted their lives. Brides and bands spoke of her skills with a camera and how she was often able to capture a memorable moment.

“Hearing of the sudden passing of Kim was a shock to our church and community,” the Rev. Mark Little of Silver Springs Baptist Church wrote in an email. “Kim lived her life to the fullest, both at church and abroad. She was an inspiration to everyone that she met. Our church and community will not be the same without her.”

Ingold worked as a career and technical education coordinator at Anson High School.
Anson Principal Chris Stinson had worked with Ingold for five years. He said individuals counseled students Monday, and staff shared memories of her.

“She was a phenomenal educator, loved by many and will be surely missed,” Stinson said. “We’re taking one day at a time.”

A tribute to Ingold is planned for Anson’s Friday night’s football game in Wadesboro.

“We’re going to try and red-out the stadium in memory of Kim since she was an N.C. State fan,” Stinson said.

Ingold had been with Anson County Schools since 1996.

“Dr. Ingold has touched the lives of many students, parents, colleagues and community members in Anson County,” Anson County Schools Superintendent Michael H. Freeman said in a statement. “She will always be remembered for the positive energy she put into life and her profession.”