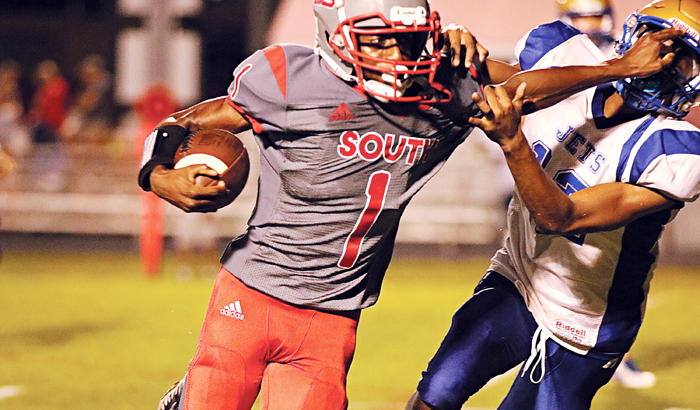 The South Stanly varsity football team improved to 2-1 on the season and put up solid numbers on both sides of the ball in a 45-8 home win Friday night over the Jordan-Matthews Jets.

Marcus Green had a big night on the ground for South with 203 yards on 11 carries with five rushing touchdowns, including scoring runs of 63 and 71 yards.

Bulls quarterback Jaquez Cooke was 8-for-16 through the air for South for 120 yards and a touchdown. Jaderian Smith had five catches for 70 yards while Cooke’s touchdown pass went to Malik Kluttz late in the first quarter.

Kluttz also added a 75-yard punt return for a score early in the second quarter.

Defensively, the Bulls limited Jordan-Matthews to 98 total yards including -10 through the air, recovering a fumble and getting an interception from Jaquavius Caraway.

Justin Gaddy led the Bulls defense with five tackles and two assists while Logan Lilly had four tackles for South, three for loss, along with a sack.

South Stanly will be off this week but will have one final non-conference matchup Sept. 20 when the Bulls host Mount Pleasant.

The Tigers are 0-3 this season after losing Friday night at home to Central Cabarrus, 45-0.