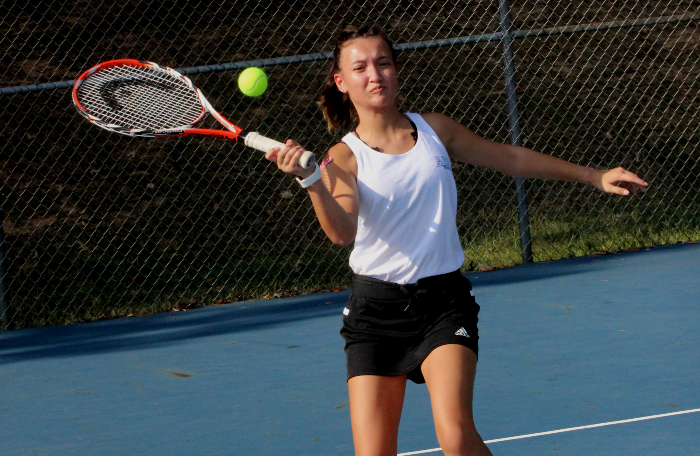 It was only several seasons ago when Albemarle High School did not field a women’s tennis team.

One student, junior and team captain Karmalana Wilder, helped to reconstitute the squad and became the team’s captain as the 2019 season has unfolded.

Wilder returned to the court this season despite being just two months away from having suffered a car accident July Fourth.

Driving on the Northeast Connector, she was involved in a car accident and continues to be in physical therapy after getting off of work. The car was totaled in the incident and she got burns from the air bag along with an injury to her back she said she had always had problems with it.

“She sent me a picture of the car and I had a little freak-out moment,” Albemarle tennis coach Vivian Bridges said.

“She didn’t know after the accident whether she would be able to play.”

Wilder continued to work with the team during the preseason, sometimes in her bare feet out on the court teaching the other players, Bridges said.

The coach tried to get her to not do as much but Wilder felt it necessary to help her teammates to show them how to serve and other parts of the game.

“She’s really dedicated. She plays as much as she can,” Bridges said.

Getting back into tennis shape was difficult, Wilder said, saying she was at the peak of getting back to tennis with the team being only started last season.

“I had practices with my girls and I love them so much. We have been preparing for this since last season. To get injured right in the middle of it was hard to come out and know I couldn’t (participate),” Wilder said.

Despite those injuries, Wilder was back on the court this season including Wednesday in a home matchup at Chuck Morehead Park against South Stanly.

Because of her injuries, Wilder, whom Bridges said would be playing a higher seed if 100 percent, has been played in the No. 6 seeded match.

Wilder, one of only three upperclassmen on the Bulldogs’ team, said tennis is her sport because of its individualistic nature in singles matches but has a team aspect as well.

“(Tennis) has been an outlet for me to relieve stress. I have a lot of friends who have played tennis in college,” Wilder said.

“I don’t want to be overly dramatic, but she gives this team life. If it weren’t for her, we would not have tennis at Albemarle High School,” Bridges said.

The Albemarle coach said Wilder helped to recruit players to the team along with talking with the school’s principal, Emily Shaw, about finding a coach for the team.

Wilder continued to push for the team and even went so far as to recruit girls from the middle school to get into tennis in order to play when coming up to the high school.

Wilder said the team’s coach has been supportive of the team and players.

“She’s super-great…she is always there to support us and wants us to have fun while improving. She’s very caring for all of us. (The coach) puts in a lot of effort,” Wilder said.

Wilder said it has been amazing for herself and her teammates to be representing Albemarle on the tennis courts this season.

“Whenever I got to play my first match back, it was just the greatest feeling. I fell in love with the game all over again. We work so hard to prove to people we want a team and deserve to be able to play,” Wilder said.

She added with a bigger team this season and friendships growing with the players, some of whom never played tennis before, shows the positives of playing high school sports.

“If you want to play a high school sport, you should be able to no matter what. I have put time, money, everything into this because I just love seeing how happy it makes the girls that they can go out and play,” Wilder said.

“Maybe we’ll win. Maybe we’ll lose. At the end of the day, we’re all happy we even got to get out there on the court.”