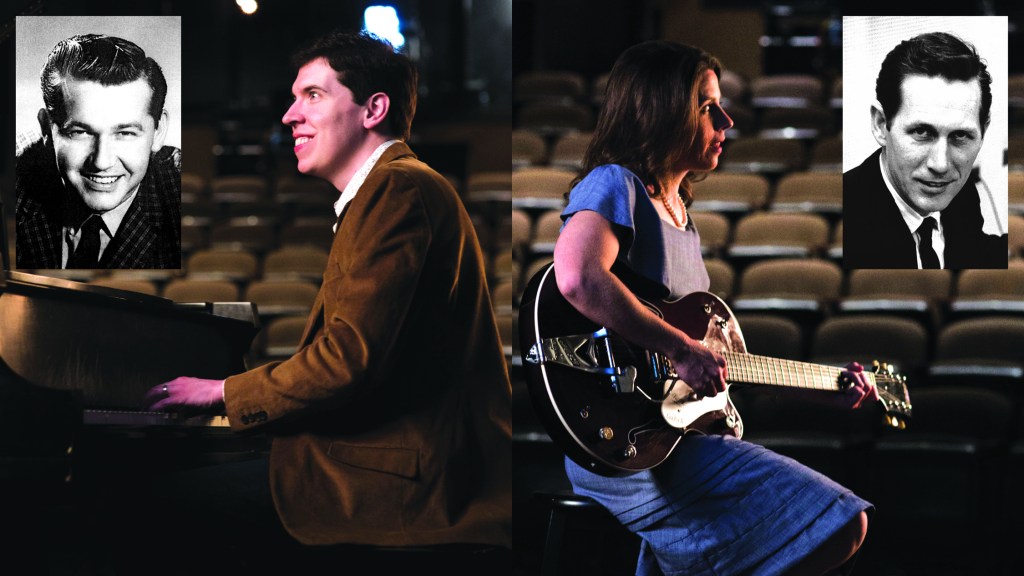 Jason Coleman, left, grandson of Floyd Cramer, and Meagan Taylor, niece of Chet Atkins, showcase the music of their relatives and others in “Nashville Legacy” Saturday at the Agri-Civic Center. (Contributed)

Although Hank Williams Jr. sings about it, it is another group of next generation country musicians who will carry on the “family tradition” Saturday night.

“This beginning concert is such a vital part of the history of country music and to remind us of the golden era of Nashville in multimedia, stories, songs and relationships that have endeared themselves to our hearts for all these years,” SCCA President Charlotte Maness said.

Coleman created the show and says it is an extension of his heritage.

After commuting a few years, Cramer arrived in Nashville in 1955 to become a studio pianist, thanks to a connection with Atkins. Signed by RCA in 1958, Cramer’s fourth single became his biggest hit. “Last Date” was released in 1960 and was kept out of the No. 1 spot by Elvis Presley’s “Are You Lonesome Tonight,” on which Cramer also performed.

After becoming established as a touring performer, Cramer would often tour with Atkins and saxophonist Boots Randolph. Besides producing albums of Cramer, Atkins was an RCA executive who worked with Eddy Arnold, Bobby Bare, Skeeter Davis and Charley Pride.
Cramer died when Coleman was 12.

“In the years since then I’ve loved playing his style of music,” Coleman said.

He and his grandfather did play piano together at home.

Coleman said he began playing piano as soon as he was old enough to reach the keys. But it was not until later that he realized the impact of his grandfather.

“I think he was pretty tickled that I was playing piano and I wish he were alive to see what I have seen,” Coleman said. “I don’t think he would realize the impact he has had. I hear so many stories now of what his music has meant to so many people. It’s pretty amazing for me to be a part of that.”

“Nashville Legacy” is in its second year on tour.

“Meagan and I go through and explore the history of Floyd Cramer and Chet Atkins and how instrumental they were in helping create what was known as the Nashville Sound,” Coleman said.

The first half of the show focuses on the history, their music and how their careers were intertwined, where they often recorded with each other.

The second half of the show features music from other performers, such as Elvis and the Everly Brothers. There are also a couple duets at the end where Coleman and Taylor perform through video with their famous relatives.

Coleman has known Taylor for about 15 years.

She started out playing piano and then switched to fiddle around age 10, when Atkins gave her a lesson. She did not begin playing guitar until she was 18. While his health had begun failing by then, Atkins’ friends were able to teach Taylor some of his techniques.

“He was glad and encouraging,” she said. “I’ll never play the guitar as well as him, but I may sing a little better.”