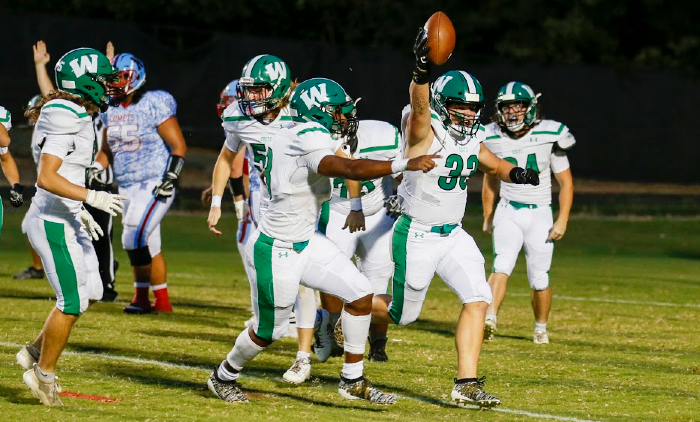 West's Gavin Hudson (No. 33) celebrates with his teammates after recovering a fumble in the end zone for the Colts' first touchdown. (Contributed by Earl Bradshaw)

The West Stanly defense continued its strong play this season with a dominating performance on the road at county rival North Stanly.

West allowed 112 net yards of offense in a 42-0 win over North, the first shutout for a Colt team over the Comets since 2002.

Allowing just seven first downs in the game, West (3-0) limited North to -25 yards rushing including a bad snap into the end zone on the opening drive for North (0-3) which West’s Gavin Hudson recovered for a touchdown.

“We capitalized on the run (game),” Hudson said. “We shut it down.”

“The guard didn’t touch me. I was like, ‘It’s mine’ when (the ball) hit the ground,” Hutchinson said.

West dominated time of possession in the first half, holding the ball for nearly two-thirds of the first 24 minutes building a 24-0 halftime lead.

Jordan Manshack led West’s offense with 75 rushing yards and a touchdown while throwing for 155 yards and two scores.

West running back Jordan Poole was contained by North to 62 rushing yards but scored twice on the ground and hauled in both of West’s touchdown tosses.

For the game, West rushed for 194 net yards on 34 carries. The Colts overall gained 349 net yards averaging 6.3 yards per play.

West head coach Brett Morton, who played as a junior in West’s last shutout win over North, said the Colts’ defense got after North from the word go.

“They held (North’s) running game in check and forced them to throw the ball. (The defense) made big play after big play. They have played well three weeks in a row,” Morton said.

The game was won in the middle of the field, according to Morton.

“It was a slobber knocker in between the tackles,” Morton said.

Morton said the Colts have some momentum moving forward to next week’s road game at Wheatmore. The Warriors (2-2) lost at Western Guilford, 33-6.

“It’s good to get this win and keep moving forward,” the coach added.

North wraps up the last of a four-game home stand this week hosting Jesse Carson (1-3) who lost to North Rowan on Friday, 45-10.