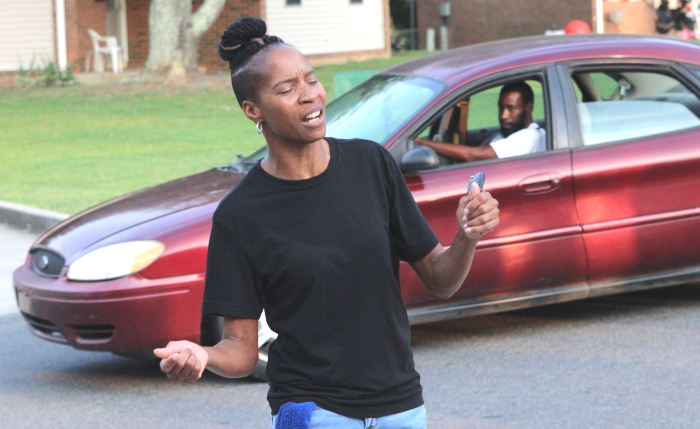 Vanda Mims sings praise songs at the end of the second annual As One Prayer Walk. (Photo by Charles Curcio/staff)

For the second straight year, people from various backgrounds and denominations came together in the Albemarle community to offer comfort and prayers.

The Rev. Irvin Moore, assistant pastor at Parkers Grove Baptist Church in New London, along with other ministers, lay leaders and community members, joined in support Saturday evening for the As One prayer walk.

The route for the walk started at the E.E. Waddell Center and ended at the City of Albemarle housing department offices on South Bell Avenue.

Participants sang songs while several stopped to pray for people as community members came out of their homes to wave to walkers.

Moore spoke to the participants before the walk, encouraging them to think about their faith beyond just the days they go to church.

“The fact that you guys are here today tells me you’re thinking beyond Sunday,” Moore said. “Let the Spirit lead you. We’re not trying to recruit anyone for the church today…if you are led by the Spirit to witness to somebody, then so be it.”

The Parkers Grove assistant pastor also wrote in a statement before the event about his belief in unity.

“I’m a true advocate that when all God’s children get together and are on one accord, a change can take place,” Moore wrote.

At the conclusion, people in the walk drew members from the surrounding residences to join in for an impromptu prayer and singing celebration.