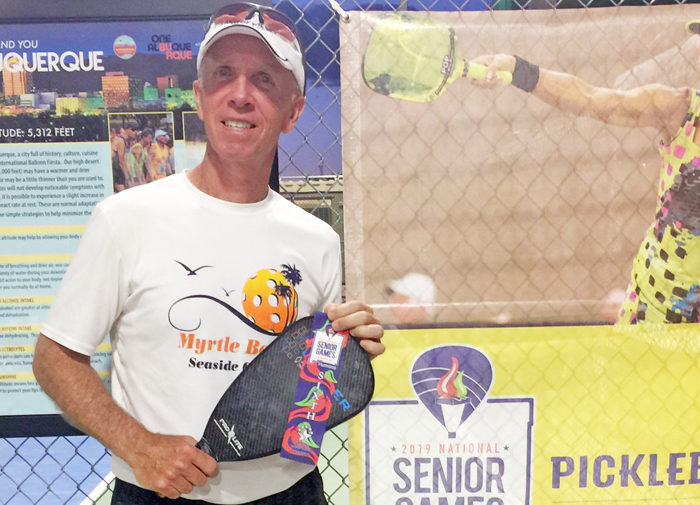 As the sport of pickleball grows in Stanly, one players recently represented the county on a national level.

Doug Smith, a long-time coach in various sports at both Endy Elementary and South Stanly High schools, competed in this year’s 2019 National Senior Games in Albuquerque, New Mexico, in pickleball.

Smith played in the singles’ events for the 55-to-59 year old age group finishing sixth overall in the national event.

He qualified for national games, which takes place every two years, after placing first in his age group at the local senior games in 2018 as well as winning gold in the 2018 North Carolina State Games.

He also competed along with Concord’s Jim Spencer for doubles in the same age group, who encouraged Smith to play after he said he was not going to make the trip out.

“He called me up and said, ‘Let’s try to work this out so we can go.’ I did do pretty well in the singles,” Smith said.

Smith said the competition level was outstanding with a number of former college tennis players have converted to playing pickleball along with former national champs in racquetball.

Having retired in 2015, Smith said his neighbor, former South Stanly standout athlete Jacob Noble, got him into playing pickleball.

“I played a little that summer and I love the game. I haven’t played a lot of singles,” Smith said, noting more running is involved than doubles, which is more commonly played.

After losing in the quarters to eventual fifth-place finisher, Chris Carpenter, he bounced back eliminating two other players in the 32-player tournament before falling to eventual fourth place winner, Todd Headley, 15-13.

“I’m very proud to represent Stanly. Folks here have fallen in love with pickleball. There are some really good players around here,” Smith said.