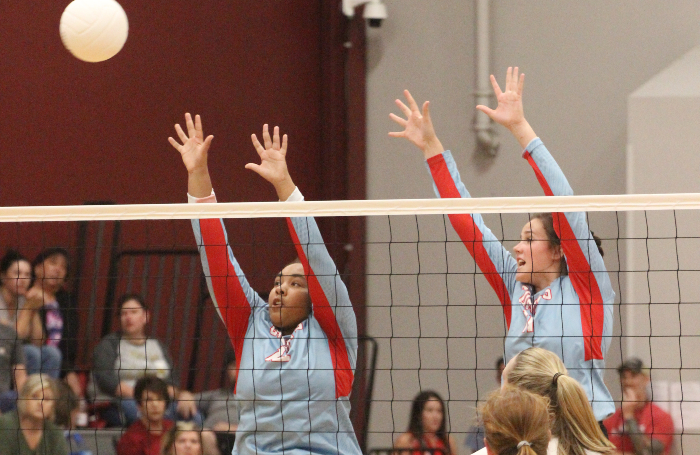 North's Rachel Lowder (left) and Nicole Lowder go for a block during the second set of Tuesday's road match. (Photo by Charles Curcio)

The dominance of the North Stanly volleyball team this season was on display again Tuesday night in a Yadkin Valley Conference road matchup at Gray Stone.

North head coach Kadie Morgan said one of the team’s goals is to not drop a set, let alone a match.

“As we set goals for the season…one of our goals is to play everyone in three sets and be done,” Morgan said.

The North coach said her team’s focus is to not give points away and take the game to the opposition.

Despite the win, Morgan said the team did not play well in the first two sets but really started playing well in the third. Libero Brinn Kimrey led North with eight digs.

“We finally started playing in the third set. We didn’t exactly show up in the first two,” Morgan said.

“We didn’t play up to our potential but we came alive in the third.”

What is most important for the Comets’ season moving forward, Morgan said, was communication and teamwork.

“It has to really stay alive. I feel like we can go all the way in straight sets. I believe I have that team.”

North gets a tough non-conference test Wednesday night at home against Mount Pleasant (8-3). Mount has won six of its last seven matches.