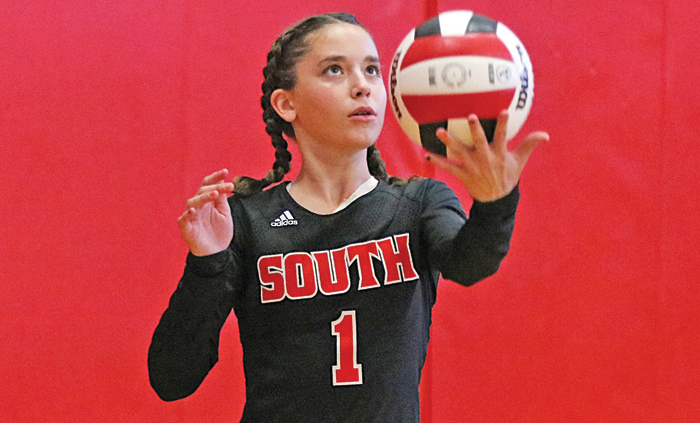 Kassie Swink serves for the Bulls in a match Thursday. (Photo by Shannon Byrd)

With Childhood Cancer Awareness Month in September, two schools are joining together to help one player and her family in their fight against the disease.

South Stanly High School freshman volleyball player Kassie Swink was diagnosed in July with Langerhans cell histiocytosis, a rare disease where abnormal bone marrow cells in the bloodstream can migrate into the skin and lymph nodes.

On Thursday at 6, Gray Stone will host the Bulls in a varsity volleyball match. The Knights will donate a portion of the gate to help the Swink family offset Kassie’s medical bills while T-shirt sales have also raised funds.

Kristine Swink, Kassie’s mother, said the family was going on vacation this summer when they noticed Kassie had swelling around her eyes and tenderness in her right temple.

While sometimes not grouped in with other blood cancer diseases like leukemia, LCH is treated like cancer with chemotherapy and other medicine.

First diagnosed as an allergy or sinus infection, Kristine said after vacation her daughter’s health had not improved.

A CT scan showed something under the right orbital area of Kassie’s head, which led to an appointment with the St. Jude clinic affiliated with Novant Health in Charlotte, where the diagnosis came out.

“It’s just one of those things you never believe could happen to you. It was a shock…it was really, really scary at first, but we just had to deal with it,” Kristine said.

Kassie said she was worried at first, but she knew the people at St. Jude would have the answers for them.

The freshman has started a year-long chemotherapy treatment plan for LCH, which the Swinks were told is an aggressive disease which can come back, especially in the pituitary gland.

An athlete in middle school, Kassie played school and travel ball in volleyball and softball and was an active person, something she wanted to continue when entering South Stanly High School.

“I was nervous because I really like playing sports. Especially going into high school being a freshman, I was excited about sports,” Kassie said.

Despite the treatments, Swink is still playing volleyball for the Bulls and plans on playing softball in the spring.

Being in good physical condition as an athlete has helped Kassie to tolerate the chemo better, she said.

“The chemo has not affected me yet, which is a good thing,” she said. “I can still play volleyball…I am still pretty normal.”

Kassie said her Rebel Bulls teammates have been supportive of her throughout what she has been going through.

“They have been there for me to help me through everything. They’ve talked to me, helped me out at practice and encouraged me,” Kassie said.

Her mother also expressed appreciation for the support she has felt from the school and community regarding her daughter’s fight. Kristine said many of the parents called to tell her their children were upset to learn of Kassie’s diagnosis and to let the Swinks know people were worried about them.

“It’s just amazing how people come together when someone like this happens even if you don’t know the person,” Kristine said.

Kristine said her daughter has been amazing after receiving the diagnosis and is just trying to keep life as normal as possible.

As the 2019 volleyball season unfolded, Gray Stone head coach Rebecca Carter said the team was looking for a service project when her players suggested helping the Swinks.

“We had just played South Stanly and the girls wanted to do something for our volleyball community,” Carter said.

Coming from that desire to help is the slogan on the T-shirts sold recently, which stated “One Goal, Two Teams” with a two-toned ribbon in Gray Stone maroon and South Stanly red.

“I feel honored and blessed to be part of a team that wanted to help out a fellow volleyball player,” Carter said. “This is a priceless learning opportunity for both teams. We are looking forward to the opportunity to honor his family.”

Kassie said she is appreciated of the benefit.

“I feel special because I knew someone was there for me, that people were thinking about me,” she said.

Kassie has expressed the desire to work with students with special needs as a career. Her mother said the battle Kassie is going through will help her to help others.

“This is hitting home because now she can really relate,” Kristine said.

Kassie said she realizes others are in worse situations than she.

She always tries to think about others.

“Always make sure you are there for friends, family and even people you don’t know,” she said. “Keep people in your prayers and thoughts.”