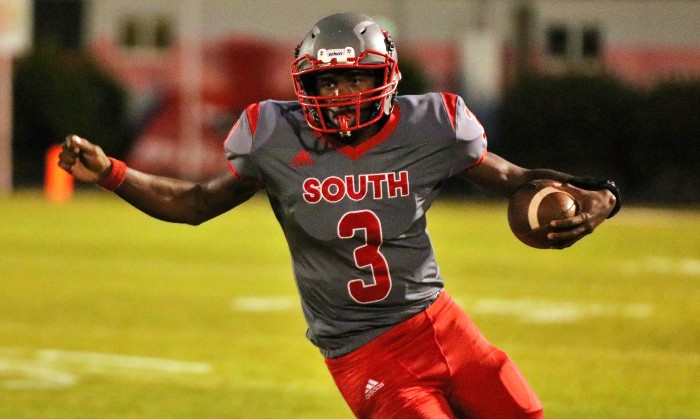 Friday night’s home non-conference game for the South Stanly Rebel Bulls against Mount Pleasant could not have started any better for the hosts.

The Bulls’ Jaquavius Caraway took the opening kickoff for a touchdown, leading in part to a 19-0 first-quarter advantage for South.

However, an injury and change of strategy by the visiting Tigers led to Mount rallying back to down the Bulls, 28-25.

Tigers quarterback Ryan Tyson was injured on the play, so Mount went to backup QB Shane Reigel and moved from the spread on offense to a pistol-set ground game.

The strategy got the Tigers (2-3) back in the game with back-to-back long scoring drives while stopping South in between on the goal line to pull within six, 19-13.

“The first quarter was all South Stanly. We then dictated the pace,” Mount head coach Michael Johns said.

South initially was stopped on the final play of the first half as the clock ran out but officials gave the Bulls a timeout with the clock reset to 1.6 seconds. Cooke scored on the next play to give South a 12-point halftime lead, 25-13.

Johns said the Tigers took motivation from the final play of the first to turn things around in the second.

“Our boys were so fired up about (the play). I said, ‘You’re boiling right now. Let’s simmer and we’ll turn the boil back on,'” Johns said about his talk to the Tigers in the halftime locker room.

In the final 24 minutes, South gained 64 total yards of offense and got into the red zone only one time, after the Tigers closed to within five points with a six-minute drive to open the third.

“(South) had a lot of guys going both ways. We just wore them down…we just decided we were going to get into the pistol and just (play) smash mouth,” Johns said.

Mount nearly took the lead on a 10-play drive early in the fourth but Justin Gaddy picked off a Reigel pass in the end zone.

The Tigers took the team’s first lead of the game with 2:05 remaining on a 56-yard touchdown pass from Reigel to Sawyer Osbourne.

Osbourne then turned around on defense and picked off a Cooke pass, the only turnover of the game for South, and the Tigers ran out the clock.

“We put pressure on the quarterback like we wanted to. Everything was clicking, then all of a sudden, they gained momentum and (it was) a snowball effect,” Ochier said.