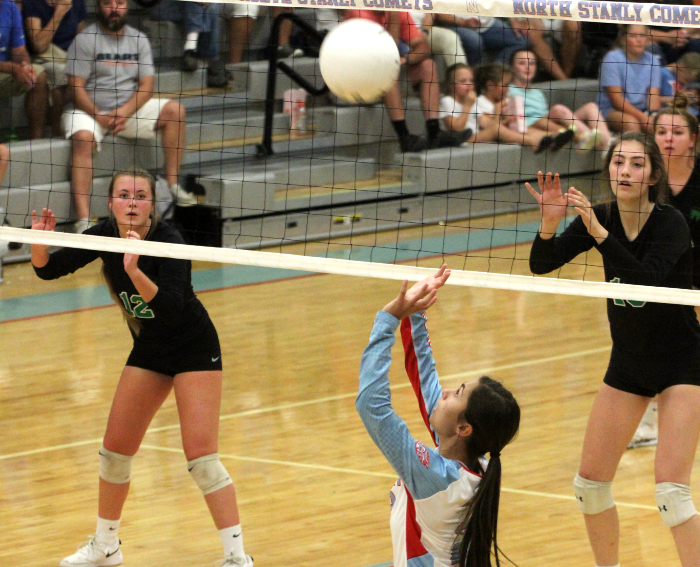 A volleyball match sure to have implications for both teams in terms of state seeding took place Monday night in New London as the undefeated North Stanly Comets hosted West Stanly.

The undefeated eight-ranked 1A Comets put the team’s record and streak of sets won on the line against the Colts, ranked 14th in the 2A classification.

Monday’s match broke a string of 36 straight sets won by the Comets who twice rallied from one set down and won the deciding fifth set by eight points.

“We had to pick up (our energy) and that comes from communication. We had to make sure everybody was up and OK,” Landis said.

When the match had to go longer than three sets, North head coach Kadie Morgan said she was a little worried at first.

“I hope the girls would not get tired out but they really showed up and played through it,” Morgan said.

After the two teams split the first two sets, Morgan said North changed its strategy, trying to tip the ball over blocking attempts of the Colts (11-3).

“We had to start playing small ball. I told the girls you didn’t have to kill it to get a point, to start placing the ball and reading their blockers,” Morgan said.

As Landis subbed in on the final point of the match serving with North up 14-7, several of her teammates joked with her about the situation coming up many times in travel ball, where the North setter was serving on match point.

“One thing that I’ve really worked on is taking a breath and don’t let the moment get too big, giving my teammates a chance to play,” Landis said.

“We’re thinking about going into playoffs and playing these types of teams,” Landis said regarding the Colts’ strength as a team this season.

Morgan said the win came at a good point in the season when the Comets needed it.

“We needed to see some competition and play a team as good as us,” Morgan said.

Taegan Lowder led the Comets with 12 kills while Nicole Lowder added eight kills and Merris Talbert had six kills. Payton Landis and Alex Childress each had 15 assists for the Comets. Brinn Kimrey led North with 26 digs.

North goes back to conference play Thursday at Albemarle while West Stanly plays the second of a three-game road trip Tuesday night at Montgomery Central. The Colts then travel to Anson Thursday.