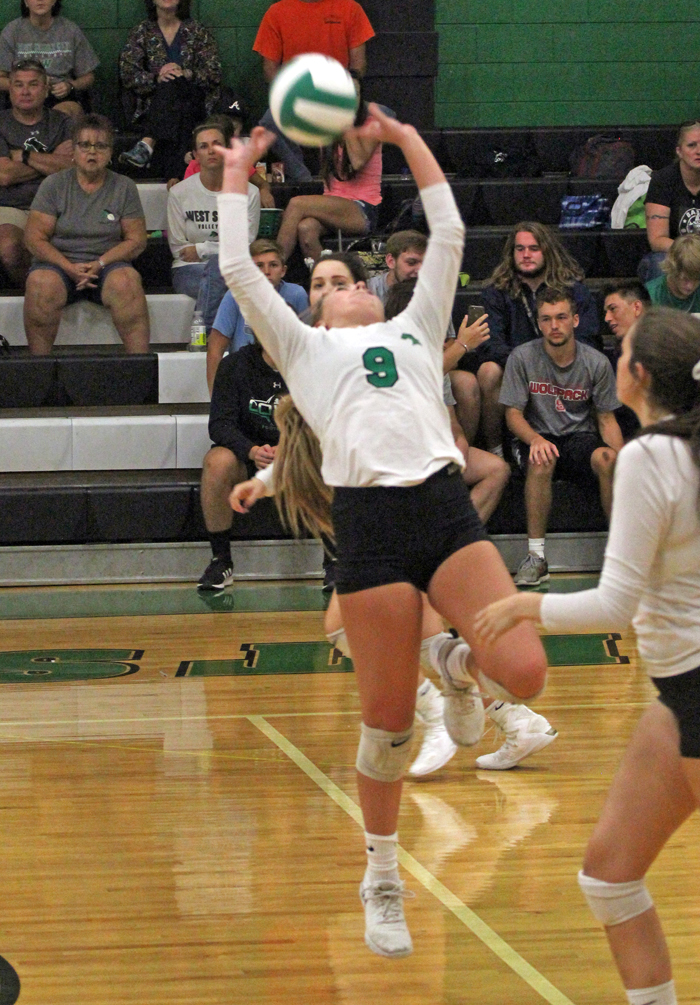 Addie Barbee sets up a West attack in the Colts' win over Central Academy Thursday. (Photo by Charles Curcio)

The West Stanly volleyball team has enjoyed a string of successful seasons in recent history, having won at least 18 matches four out of five years and never finishing below the .500 mark.

West’s success has continued this season under first-year head coach Steffi Dutton. The former standout at Albemarle and in college at Bluefield has helped lead the Colts to 14th in the state rankings heading into this week’s competition despite injuries.

Dutton said West has had to get over injuries this season which have affected the team’s depth.

Addie Barbee has stepped into the role of setter after a season-ending injury to Riley Barbee, which has been a process.

“It’s been hard for the team, but we have tried to come back,” Barbee said. “The last few games, we’ve really stepped it up.”

Dutton said the team’s members are having to step up.

“They don’t really have a choice,” Dutton said.

Madison Kee, one of the leaders in kills for West, said communication with the setter is important even if it is nonverbal.

“Addie, I can say ‘Hey!’ on the court and she knows exactly what I want,” Kee said.

Playing three matches a week, including three on the road in the week ahead, necessitates going deeper into the bench to rest players and bring up JVs occasionally as well, the West coach said.

“I’ve added some teams which have definitely been (strong) competition,” Dutton said.

The team’s two losses were to bigger schools, Carson and Sun Valley.

“The better a team we play against, the better we become,” Addie Barbee added.

The week ahead includes a test in a county rivalry showdown between the Colts and the undefeated North Stanly Comets Monday night in New London.

Dutton said many of the players on both sides have played together in travel ball and know each other well.

“It’s always a competition, especially with two teams that are good,” Dutton said. “It’s going to come down to the mental game.”

Barbee and Kee said the players are friends off the court, but enemies on it.