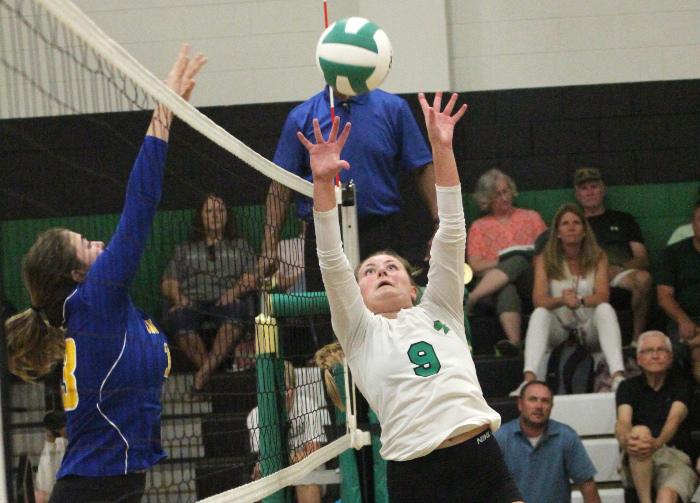 West's Addie Barbee goes for at tip over the net during Tuesday's home win over Mount Pleasant. (Photo by Charles Curcio)

West Stanly junior Addie Barbee did not start off her high school volleyball career as a setter but has quickly developed into an important part of the Colts’ success in 2019.

Two years ago, Barbee was used more on the attack, but transitioned over to setter this season. She was going to share the duties with another junior, Riley Barbee, but due to an injury to Riley, Addie has stepped up, according to head coach Stephanie Dutton.

“With our other setter being out, I knew I would be the one on the floor (doing) the most setting and talking,” Addie said.

“I knew I needed to step up and be a leader on the team. All my teammates have helped and we are working well together.”

“Addie has fulfilled her role as a setter, taking more control of the offense towards the end of last season and definitely this year,” Dutton said.

Setters do not always get the amount of recognition other positions get, Addie said, but added it was not important.

“I try to make everyone else look great so our team does well,” Addie said.

“When they are on and click, they are unstoppable.”

In the win, Dani Moss and Cristin Cline had 11 kills each while Madison Kee added 10 kills.

Having gone through the first round of conference games without a loss, West’s season continues Thursday at home against RRC opponent Forest Hills. The Colts then get a rematch with the undefeated North Stanly Comets in a non-conference matchup Saturday at 2:30 p.m.

“We all work together and we have the chance to go far. I’m really excited for the rest of the season,” Addie said.