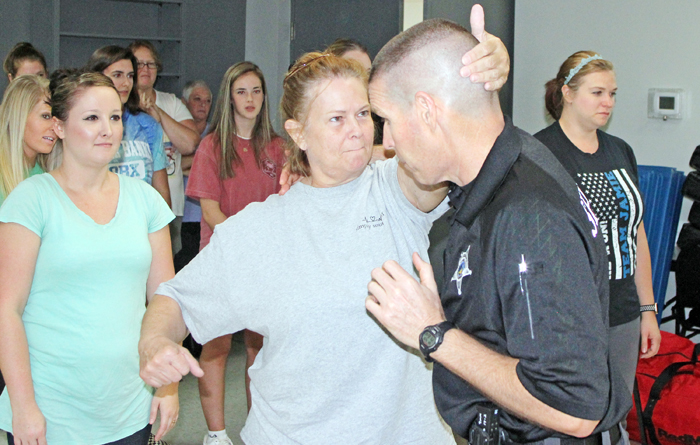 The Stanly County Sheriff’s Office hosted the first of what Sheriff Jeff Crisco said is a planned series of free women’s self-defense classes.

Deputy Tim Rogers, who has trained with the Army, Marine Corps and Navy SEALs, was one of the instructors along with Stephanie Fletcher of Ichiban Defensive Systems.

With around 25 participants, Rogers and Fletcher demonstrated some of the most common attacks on women and how to survive them. The class worked on a number of blocks and strikes as well as learning the balance points on a person to attack. Attendees also reviewed the pros and cons of weapons people carry.

“We want to bring awareness (and) help keep the citizens of Stanly County safe,” Rogers said.

In the class, Rogers said the techniques taught were specifically designed for ladies to escape and survive a violent encounter but not to turn anybody into an assassin.

Rogers told the class one expects to have people attacking when one steps out of a helicopter in Iraq or Afghanistan. However, when people go about their life, they do not expect to run into trouble.

“You expect to have a good time and live your life accordingly not feeling threatened,” Rogers said.

Rogers said women are attacked differently than men while also usually not having as big of a skeletal and muscular system than men.

“You are deemed the weaker sex, like it or not. You cannot go toe-to-toe with a man and win,” Rogers said.

At 164 pounds, Rogers said he often has to deal with subjects outweighing him by 100 pounds or more.

The only way to deal with differences like that, he said, is to cheat.

The fiercest fighting machine he has ever encountered, Rogers said, despite all the training he has gone through, is a mother trying to protect her children.

“She is not going to stop,” Rogers said. “She has no regard for her own personal safety. It’s that fighting spirit we have to harness in you.”

One of the hardest types of cases to prove in court, Rogers said, are sexual assault cases because many times the eyewitness testimony of the victims are vague. Often victims see their life flash before their eyes and are in such fear of their life they lock up, he said.

Many times, there are no witnesses to the incidents and victims often disturb or do away with physical evidence.

In the case of abductions, Rogers quoted numbers from the Federal Bureau of Investigations stating abduction victims have less then a 3 percent chance of being found alive if abducted.

“Is it better to fight back? Absolutely. I would rather be found dead in the parking lot than be found somewhere, because I’m going to die anyways,” Rogers said.

If victims do fight back and put up resistance, which makes the abduction more work, their chances of survival go way up, he said.

“I’m not saying you won’t get hurt, but your chance of survival goes way up,” Rogers said.

Fletcher also shared about her own life and having been a survivor of sexual assault.

At the end, Fletcher gave the women advice to always making sure someone knows where they are going and when they will be back.

“Tell someone where you are,” he said. “Pay attention to your surroundings. Don’t be a statistic.”