West cousins lead in the classroom, on the courts, fields 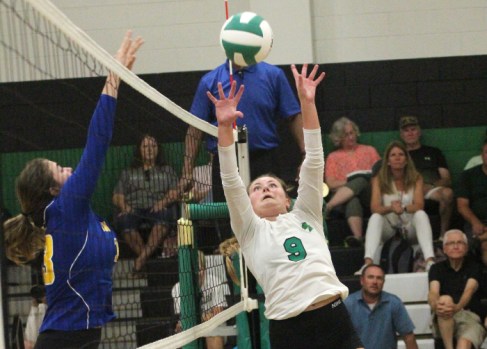 West's Addie Barbee goes for at tip over the net during Tuesday's home win over Mount Pleasant. (Photo by Charles Curcio) 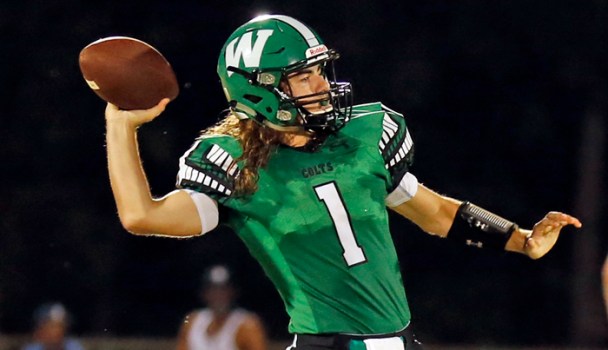 In an era of developing the definition of a student-athlete, two West Stanly students represent the the values of true sportsmanship and character both in and outside the classroom with success on the fields of competition and in the classroom.

Cousins West volleyball junior Addie Barbee and Colts starting quarterback junior Jordan Manshack are competitive with each other whether in class or in the backyard playing one-on-one games.

Every Sunday, the families gather at the house of her grandmother, Angela Barbee, where very competitive basketball games go down.

Ask either of them who regularly wins those games and one might get two different answers.

When not earning a 4.1 GPA in school, Barbee’s role on the volleyball team has transitioned into the setter.

Setting up the West hitters, Barbee recently passed 1,000 career assists by dishing out 43 in a win over Mount Pleasant.

Support also comes from her friends, Barbee said, which are in her honors’ classes, along with Jordan and his family.

Having Jordan as her cousin, Barbee said, was fun because the two grew up being around each other.

“We’ve always had classes together,” Barbee said. “His friends are my friends. My friends are his. They are all together and it’s fun.”

Barbee said she and her cousin have tried to be role models for others.

“I always want to try to be the best role model for any body,” she said. “I know I looked up to the high schoolers and wanted to be like them.”

He said balancing school work and practice is not always hard because often teachers at West give students time in class to get done.

“As long as I do my work on time, it’s all good,” Manshack said.

School first is the ideal put forth by his parents, Ashley Barbee and Jeremy Manshack. Many times before a Friday night game, Manshack said he gets homework done in the locker room or sitting in the coaches’ office.

“My parents told me to put school first,” he said.

Jordan focuses on school during the day, but when the dismissal bell rings it is down to the fieldhouse to practice. The time is not limited to practice, as Manshack said he often stays after to work on pass routes with teammates like Will Barbee.

Time spent during weightlifting classes with strength coach Wes Herlocker have helped him learn attention to detail and accountability above and beyond the physical gains.

However, many nights when the books are put up, Manshack said he watches game film.

“I usually watch the team we’re playing that week,” he said. “I’ll see how their defense is and stuff.”

While knowing he misses some time socializing due to playing sports, including basketball in the winter, Manshack said he does not think about the time missed.

“I’ve always loved sports and I’m okay with dedicating my time to them,” Manshack said.

What little time he does have, Manshack enjoys going dove hunting or fishing with  friends.

“It gives me that little moment of being a normal kid, not having to worry about all the sports or schoolwork.”

Manshack said his parents have always insisted on him getting good grades, which is important for him to do for them.

“They have done so much for me to make sure I stay on track,” Manshack said.

He would like to play football in college and do something in the medical field, possibly be a dermatologist.