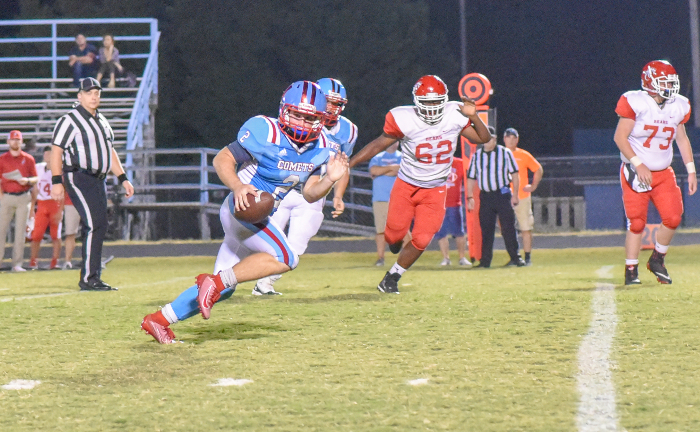 From the opening drive Friday night at R. N. Jeffery Stadium, the North Stanly football squad dominated on both sides of the game against visiting Chatham Central.

The Comets posted the biggest margin of victory in the school’s history, limited the Bears to -13 net total yards and scored early and often in a 74-0 blowout win.

Friday’s 74-point margin of victory was the team’s largest all-time and the Comets’ point total came one short of the school’s record for most points scored in a game.

North’s defense produced points as well as Dylan Eudy and Stephan Harris both returned picks for touchdowns. The Comets also has a safety late in the first half against Chatham Central (0-7, 0-2 YVC).

The junior credited the offensive line’s efforts saying there is nothing much a team can do with the line is playing that well.

North scored in every manner possible including a 41-yard punt return for a touchdown from Cooper Hogan and a 36-yard field goal from Dawson Hunt, his first of the season.

“(There are) two halves of the season. We played a preseason with some tough non-conference games. We’re in defense mode of our conference title,” Crisco said.

“It’s a whole new season for us. It’s 0-0 going into conference and sets the whole tone for the rest of the season,” Barber said.