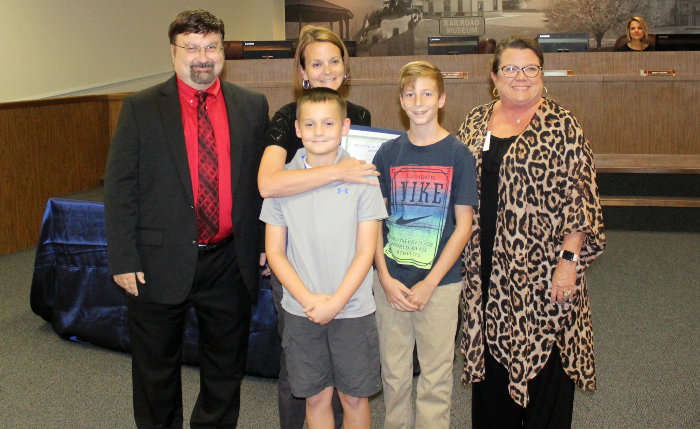 Emily Shaw is presented a certificate as the 2019 Stanly County Schools Principal of the Year. From left, Superintendent Dr. Jeff James, Emily Shaw and her sons, Carter and Carson Shaw, along with SCS's Vicki Calvert. (Photo by Charles Curcio)

She has worked in education for more than a decade, but her recent efforts in trying to turn things around as a principal have garnered recognition from Stanly County Schools.

The school has made significant strides recently. Albemarle’s four-year cohort graduation rate have increased from 78.6 to 86.5 while its growth index has improved.

“I am extremely proud of Mrs. Shaw and her accomplishments,” SCS Superintendent Dr. Jeff James said. “I think, along with her peers, her work ethic and passion for learning is why she earned principal of the year. I am proud to have her as part of Stanly County Schools.”

Shaw credited the faculty and staff members for their efforts at AHS as the reason for the award.

“It’s not just me,” Shaw said. “It’s my school, my staff, the community, the students, the parents. We are all just banded together and we are determined to make Albemarle the best school.”

Shaw said changing perceptions of the school has been an obstacle for herself and the staff to overcome.

“We are knocking (obstacles) out one at a time,” Shaw said. “We know what we’re capable of. (We are) letting people see Albemarle is a great school and how awesome our students and teachers are. We are changing that by working with the community and spotlighting all our accomplishments.”

Shaw said now is the time to come together.

“It’s time we started bridging some of those gaps and working together,” she said. “To see it happening is truly amazing, to have the community support is humbling.”

She said Albemarle Mayor Ronnie Michael and the City Council have shown support for the school.

“All the little pieces are coming together,” Shaw said. “They want to be together. They are authentic in the conversations I have with them. I know we’re going to work together to make Albemarle even better.”

Michael congratulated Shaw and the AHS staff for helping students to improve their grades. He said the school will add more trade classes soon which has been a need in the community.

“Many of the students will never go to college, but can make good money in the trades,” Michael said. “Employers (are) looking to fill those positions.”