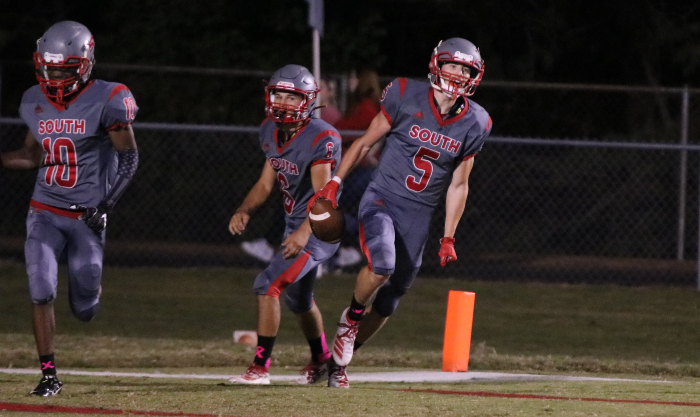 Jadarian Smith (No. 10) and Trevor Tucker (No. 6) celebrate after Justin Gaddy's pick-six in Friday's home win.

Last week, the South Stanly football team saw its opponent get off to a fast start, but the Rebel Bulls flipped the script Friday night.

Jaquez Cooke threw three touchdown passes and had 125 yards on 6-of-15 passing, including scoring completions to Jadarian Smith, Jaquavius Caraway and Malik Kluttz. The Bulls scored the first 42 points of the game to lead 42-0 at halftime.

South head coach Ryan Ochier said the Bulls’ offense was what he envisioned the team would have week in and week out before the season started.

Smith, who entered the game leading the YVC in receptions and yards, has been a huge part of the offense for South, Ochier said.

“He is really stepping to where we need him to be,” Ochier said.

Defensively, South limited North Moore (1-5, 0-3) to 39 yards in the first half. The Mustangs added two passing touchdowns with a running clock in the second half.

South also got a pick-six from Justin Gaddy, who returned to the defensive lineup after missing the North Rowan game. The Bulls’ Trevor Tucker got a sack of the North Moore quarterback in the end zone for a safety as well.

“You could just tell there was a missing link last week,” Ochier said. “Gaddy is that missing link. He solidifies how we run our defense. He is our commander. He does everything we ask him to do and more.”

Gaddy added: “We have worked a lot on our pass drops and (defensive) coverage.”

On the special teams side, Kluttz returned the free kick off the Bulls’ safety 52 yards for a touchdown.

The Bulls travel to West Stanly (6-0) for the first of South’s three county games. South can spoil West’s bid to win the Stanly Cup outright Friday night with a victory.