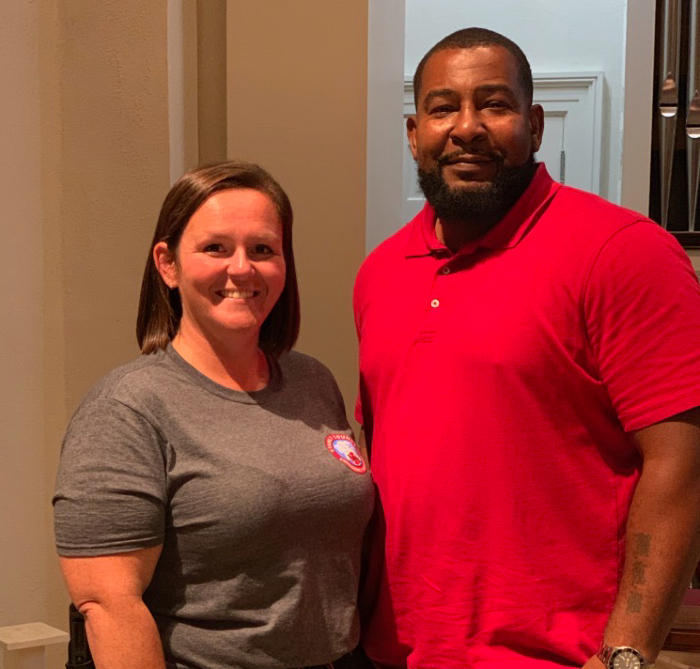 Community paramedic Ashley Hernandez, left, talks with Marcus Berry regularly while attempting to save lives in the battle against opioids in Stanly County.

Even after getting kicked out of high school a few months shy of graduation and going to prison numerous times for selling drugs, Marcus Berry had no intentions to quit. He wanted to achieve his goal of being the biggest drug dealer in Charlotte.

Besides selling, Berry had been a drug addict for most of his life — from the late 1980s until 2016, when, after pressure from family members and others, he finally stopped and got treatment.

Turning his life around

Berry will always remember April 26, 2016. It was the day he went to the Salvation Army’s Rehabilitation Center in Charlotte. The day he stopped using drugs.

He was on probation and his probation officer convinced him to get help.

“My probation officer was like, ‘Listen, you are a good person. You are a wonderful person, but you have a drug problem. I don’t want to send you back to prison, I want you to get your life together,’ ” he recalled her telling him.

“When I went in, that was the time I surrendered,” he said. “It’s time to change. It’s time to do something different.”

Berry’s son and daughter, who were both in their 20s, also convinced him to get help.

While he tried to be there for his children as much as possible, he missed many milestones, like school events, he said.

The center provided Berry with a structured environment and a sense of protection during the six months.

Berry worked each day at the center, first at a warehouse and then helping with laundry. Besides providing him with meals, clothes and a place to sleep, the Salvation Army provided him with a small weekly stipend.

He also began going to support groups daily and began talking with people who had been clean for decades.

After the six months, the Salvation Army hired Berry in November 2016 as a resident manager for the weekend shift. He worked with the individuals to make sure they were focused and going to their job assignments and support groups.

Berry still works as a resident manager on the weekends.

Working to help others

In 2018, Berry went online and saw a job opening for a peer support specialist at Monarch in Albemarle. Though he didn’t know anything about the company or the city, he filled out the application.

He traveled to Albemarle for an interview and Monarch hired him in March 2018.

Berry’s job was to meet with people dealing with mental health issues or substance abuse and start building a rapport with them.

“Coming in, a lot of people have been so isolated and out of society for a while, you have to pretty much push them a little bit,” he said.

He focused on what each person’s strengths were and worked to create opportunities for them.  He helped each one create a person-centered plan to try and discover what his or her goals were.

Among other things, Berry helped individuals get into Stanly Community College to work toward their GED and helped people with public transportation.

Berry met with around 15 individuals once or twice a week for up to two hours at a time.

All of his hard work paid off when he won Monarch’s Dream Maker Award in March of this year.

In July, Berry transitioned to a new job at Monarch as a peer navigator. From 11 a.m. to 7 p.m. weekdays, Berry works with paramedics as they respond to overdose calls and provide people with Narcan, a medication that reverses opioid overdoses if administered quickly enough.

“I love having him as my partner,” community paramedic Ashley Hernandez said. “He’s definitely an amazing asset to us.”

Similar to his job as a support specialist, Berry talks with the individuals and offers them hope, advice and encouragement.

Hernandez loves Berry’s openness with his past experiences and how he is not afraid to hide it when talking to people.

“He has a way of speaking with people in a way that he’s never condescending, he’s never judgmental, he’s always very open and loving,” she said.

Both Berry and Hernandez were part of a four-person opioid panel discussion a few weeks ago about ways the community is working to combat the drug problem.

Once at Monarch, patients receive Suboxone, a medication which suppresses withdrawal symptoms. They also work with medical professionals as well as Berry, who helps them along their path to recovery.

Berry said he is just trying to do his part in helping to combat the opioid epidemic in Stanly County. His biggest thrill is seeing people come to Monarch, stay clean and start living.

He has also made an impact in the community beyond his work at Monarch. On Monday and Thursday nights, he interacts with homeless people as they are fed at the Soul Food/Grace Place in Albemarle.

Berry has not used drugs or had alcohol for the last 44 months. He no longer associates with anyone who sells or uses drugs. He still attends around three support groups in Charlotte per week.

He is also working at becoming a certified substance abuse counselor.

“My desire to stay clean is way more than my desire to use,” he said.

Berry said his children are proud of him, which he calls a great feeling.

He got married in June and his wife has two sons, ages 9 and 14. Berry makes a concerted effort to go to their school events and be an active part in their life.

He recommitted his life to Jesus Christ, got baptized again and regularly attends church in Charlotte.

He believes if he was still using drugs he would either be in prison or dead.

“Those are the only two things that will come out of using drugs,” he said.

He advises people struggling with addiction to leave the drugs behind.

He stills considers himself an addict, except now he’s a recovering one, which for many like him is a life-long process.

After almost 30 years, Berry’s addiction no longer rules his life.