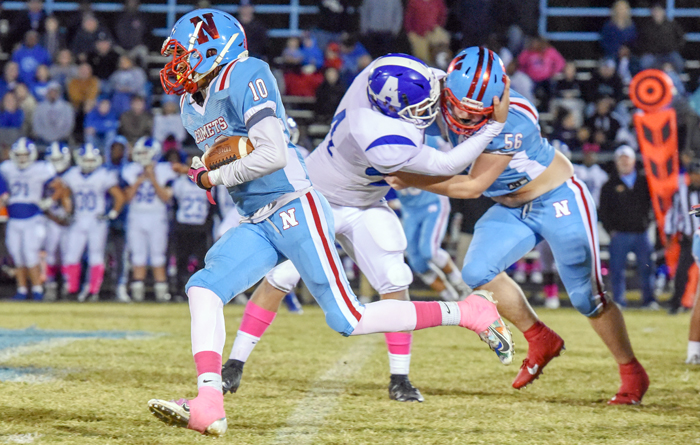 North jumped out to an early lead and went on to a 20-7 win over Albemarle.

An early score on the first offensive play for North (4-4, 3-0 YVC) put the Comets up early 7-0. The score stayed the same into the halftime break.

Chamar Watkins scored a 30-yard touchdown in the third quarter putting the Comets up, 14-0.

Quarterback Antonio Burns answered for the Bulldogs (2-6, 2-2) with a one-yard touchdown run in the fourth quarter. Burns finished the game with 135 passing yards going 11-of-16 while adding 22 rushing yards.

Kyree Dykes scored with 1:12 left in the game for North on a three-yard TD run.

Christian Barber led North with 112 yards rushing on 23 carries with the initial touchdown in the game.

Meliek Bryant had eight tackles to lead North while Gabe Hogan, Dylan Eudy and Cooper Hogan had seven tackles each. Hogan also added a sack and an interception while Eudy also picked off an Albemarle pass.

Josh Smith had a big night for the Bulldogs hauling in six receptions for 83 yards. Adrian Little led the Albemarle defense with 13 tackles while Josh Smith also added an interception.

The Bulldogs host South Davidson (0-8, 0-3) for homecoming this Friday.