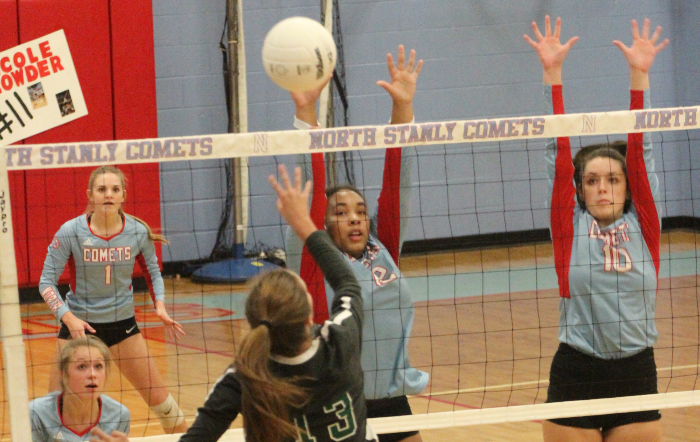 Having lost 11 regular-season wins to forfeit, the North Stanly volleyball took to its home court Tuesday night in the semifinals of the Yadkin Valley Conference seeded fourth facing the No. 1 seed Uwharrie Charter Eagles.

Overcoming some early hitting errors, North’s offense settled in and the Comets’ height dominated the Eagles at the net in a three-set sweep for the hosts with scores of 25-16, 25-13 and 25-15.

The win put the Comets into the finals of the YVC tournament where a win would guarantee a spot in the 1A state playoffs.

“Everything right now we’re using as motivation,” North head coach Kadie Morgan said. “We came out with a fire under our feet.”

Overcoming the forfeits has put a chip on the Comets’ shoulders, Morgan said.

“We’re mad that it happened but we’re using it as motivation to keep going. We’re calling it our little Cinderella story. We might have to start from the bottom and work our way back up, but we’ll be there in the end. That’s for sure.”

Nicole Lowder led North with 10 kills including several which garnered a vocal reaction from herself and her teammates.

“She is very, very focused. She is in it to win it. We all are,” Morgan said.

Uwharrie Charter (18-6) still has one of the YVC’s guaranteed bids into the state playoffs and will likely host a first-round game Saturday.