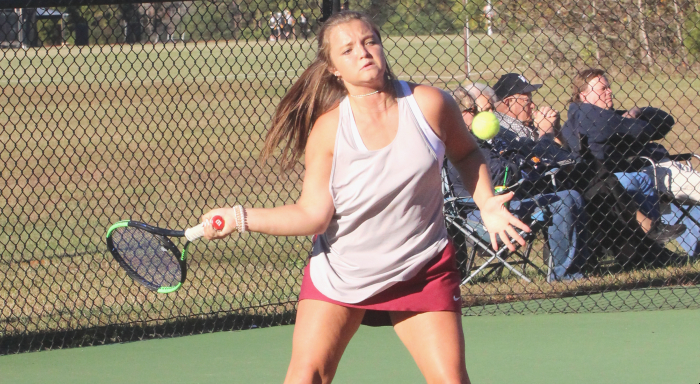 Gray Stone's Emma Bost returns the ball during her win in Wednesday's match versus Mount Airy. (Photo by Charles Curcio)

The Gray Stone women’s tennis team opened the 2019 1A dual team playoffs with a second-round matchup Tuesday against the Mount Airy Granite Bears, the No. 2 seed from the Northwest Conference.

Playing at the Knapp Tennis Center on the Pfeiffer University campus, the Knights earned wins in the top five singles to advance with a 5-0 win over the Bears (14-5).

Emma Bost swept the top-seeded match for the Knights (19-0) not dropping a game winning 6-0, 6-0 over Meredith Marion.

Ella Hedenskog won in straight sets at No. 3 singles 6-2 and 6-1 while Emma Sparger posted a 6-2, 6-3 win over Kancie Tate at the fourth-seeded singles matchup.

The Knights will be on the road Tuesday at Pine Lake Prep (11-0).