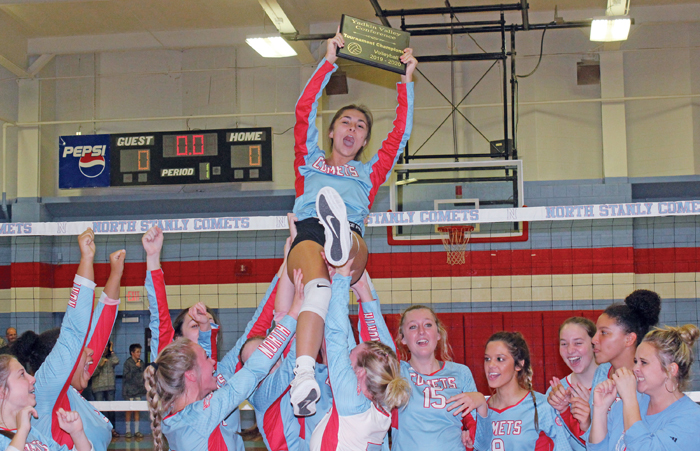 Entering Wednesday’s Yadkin Valley Conference volleyball tournament championship finals, host North Stanly was the guest on the scoreboard on the team’s own court.

Having to play as the fourth seed due to losing eight conference games to forfeit, North rallied from a slow start against No. 2 seed Gray Stone and secured a spot in the state playoffs with a sweep of the Knights.

The Comets (14-12) assured themselves of a place in Saturday’s first round of the NCHSAA 1A state playoffs with the win after finishing fourth in the regular season due to the forfeits. On the court, North has won 25 out of 26 matches, with the team’s only on-court loss coming at West Stanly.

“(The win) assured us of the type of team we are, that we can pretty much overcome anything,” North head coach Kadie Morgan said.

“This assures us we have the talent it takes. We just have to apply it to every single game situation.”

Morgan said the team has dug even deeper into its own talent for the game and continue to show the players’ determination.

Senior middle blocker Nicole Lowder, who led North with 14 kills, said the 2019 Comets season has been everything for which many of the players have been working towards even before high school, as far as six years back.

“After all that mess went down, we knew something had to change,” Lowder said referring to the forfeits.

“We want to go all the way and do what we say we can do. We have to put our hearts into the game.”

The senior said her mindset towards the last few games has been to play like each one was her last.

“We really want to win and this was our chance to get into the playoffs,” Lowder said about winning the YVC tourney title.

“It’s settling in that I’m a senior and (each game) could be the last game I ever play. I put my heart and soul, every little bit, into it.”

Gray Stone jumped out to a 5-0 lead to start the match and led as late as 8-5 before the Comets rallied midway through the first to eventually win by seven.

North built an early lead in the second set and never trailed to take the middle frame by nine points.

In the final set, North jumped out to an early 9-2 lead, forcing a timeout. The Comets outscored the Knights 16-5 the rest of the way.

Moving forward, Lowder said the team has to keep in mind the Comets are a good team but not be overly confident.

“We need to treat (Saturday) as just any other game…if we just relax and play our game like we know how, we’ll be fine.”