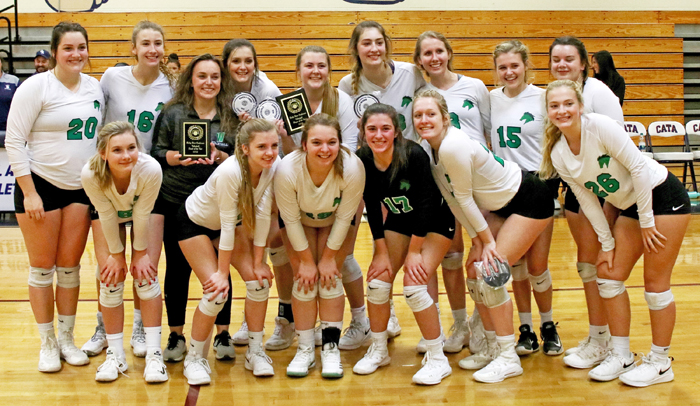 The West Stanly Colts volleyball squad fell behind early Wednesday night in the finals of the Rocky River Conference tournament played at Central Academy against the No. 2-seeded Mount Pleasant Tigers.

Undaunted, the top-seeded Colts fought back to win the next three sets and earn a 3-1 win, making it a sweep of the regular-season and tournament championships for West.

“We always love the rivalry matchup between West Stanly and Mount Pleasant, especially when competing for the tournament title.”

Dutton said the win was a huge accomplishment for the players and the program.

“Being the regular season champs and winning the conference tournament was one of our goals going into this year, however, going undefeated in the conference was an exciting bonus,” Dutton said.

The win for West is the team’s second straight tournament title and sixth in the last seven seasons.

Along with the championship, West earned individual honors. Moss, Kee, Cleaver and Addie Barbee were named All-Conference, with Raelee Furr and Caylee Clayton as honorable mention. Barbee was named the player of the year while Dutton was the conference’s Coach of the Year.

“I can’t help but to keep smiling for how excited and proud I am of our team,” Dutton said.

The Colts are a No. 6 seed heading into the 2A state playoffs and host Bandys on Saturday at 2 p.m., a game for which Dutton said the team is looking forward to playing.