North Stanly, North Rowan battle for first in the YVC 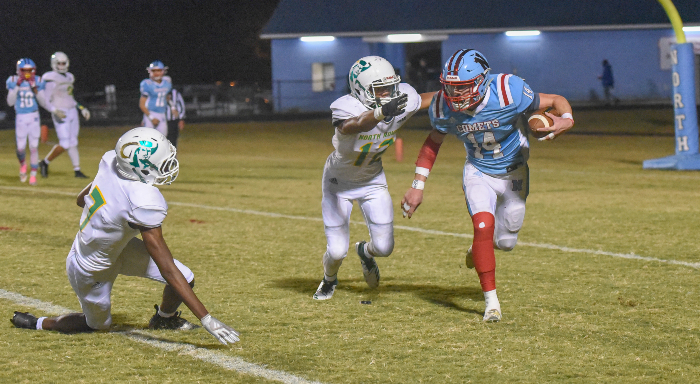 First place in the Yadkin Valley Conference was on the line Friday night as the North Stanly Comets hosted the North Rowan Cavaliers.

The Cavs’ defense stifled the Comets’ offense for the majority of the game and went on to a 34-8 win.

North Stanly (4-5, 3-1 YVC) had 59 total net yards of offense in the game. The Comets were limited to one net yard on the ground including a lost fumble and a blocked punt which was recovered in the end zone by the Cavs for a touchdown. Quarterback Luke Shaver threw for 58 yards and a touchdown but was picked off late in the game.

“We had a little success with the pass early but we had too much pressure (on the quarterback).”

Crisco also said North Stanly played people on the line who had not played line for a while.

The Comets’ lone scoring play in the game came after the Cavaliers had built a 22-0 lead. With five seconds left in the game, Shaver found Joseph Benfield on a stop-and-go route down the home sidelines for a 28-yard TD. Christian Barber ran in the two-point conversion to put the Comets down by 14 at halftime, 22-8.

North Rowan (7-3, 5-0) got big offensive nights from running back Malcolm Wilson and quarterback Kyree Sims. Wilson finished with 132 yards on 22 carries with three TDs. Sims threw for 133 yards on 12-of-10 passing with a touchdown pass to Denerio Robinson.

North Stanly did not get a first down in the second half, but defensively were able to keep the margin at 14 points until the Cavaliers pushed the lead back to three possessions with a touchdown in the final eight minutes.

The Comets have two YVC road games left in the regular season. North Stanly travels to North Moore (3-5, 1-3) on Friday. The Mustangs won a non-conference matchup Friday with Spring Creek, 40-0.

“We have a lot of football left. Winning out would go a long way for our playoff seeding,” Crisco said.