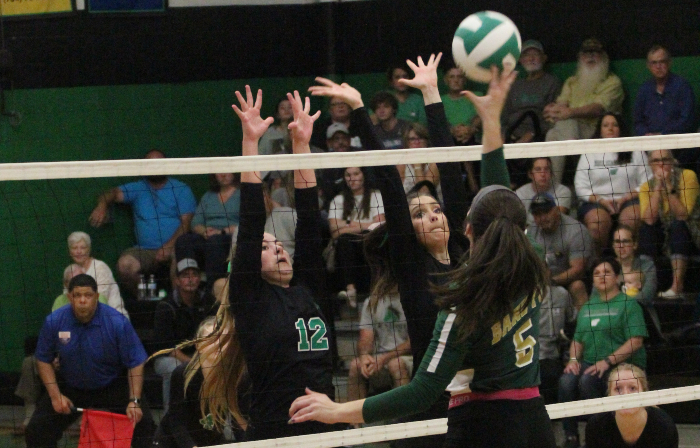 Addie Barbee (left) and Madison Kee go for a double block in the third set of the Colts' home playoff win Saturday. (Photo by Charles Curcio/staff)

The West Stanly volleyball team opened the 2019 2A state playoffs at home Saturday afternoon versus No. 27 Bandys.

Showing no letup from sweeping the Rocky River Conference regular-season and tournament titles, the sixth-seeded Colts advanced easily over the Trojans with scores of 25-8, 25-23 and 25-8.

Early aces by West (23-3) helped the Colts jump out to a fast start and an early 12-4 lead in the first set. West outscored Bandys 13-4 over the remainder of the opening frame.

“From the beginning, I knew this was going to be a good game. We started fast and strong. We had a job to do,” West senior Raelee Furr said.

Colts head coach Stephanie Dutton said she has watched film on the Trojans and felt if her team could serve well West could force the visitors out of their offensive system of feeding the middle hitters.

“I knew if they could get it to her, we would struggle, but we did the job and were fantastic,” Dutton said.

West’s head coach said her team did a good job of finishing points, something for which the Colts have worked on all season in practice.

West went on a 6-0 run in the second set but Bandys fought back to even with the Colts before West won by two points.

The third set was more like the first, with a long run leading to a double-digit win and the match.

Kayli Cleaver led West with 11 kills while Cristin Cline added 10 kills. Kelsey Parker had 13 digs for the Colts while Abby Efird and Caylee Clayton had 10 digs each. Addie Barbee paced the offense with 39 assists.

Dutton said she compared the state playoffs to the NCAA March Madness Tournament to her players.

“Anything can happen. Anything can go on. Nothing is expected, no matter if you’re the higher or lower seed. You just have to come in ready to play,” Dutton said.

Dutton said playing at home is a big comfort, including having the Colt Crazies student section and the cheerleaders out to support the volleyball squad.

“It’s nice for having the support for these ladies. (We) support the other teams and other teams come out and support us.”