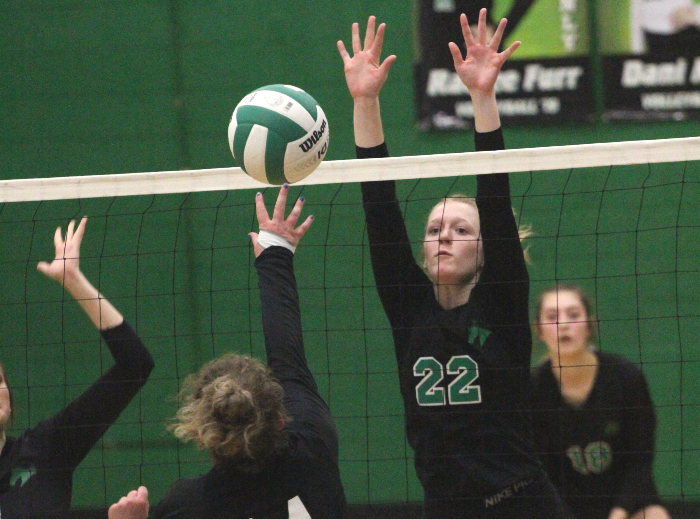 Another packed house at the West Stanly gym Tuesday night witnessed a 2A second-round volleyball match which needed five sets to determine a winner.

The No. 6-seeded Colts jumped out to a two-set lead but the 11th-seeded Patton Patriots rallied to win final three sets and the match over West.

“We are so young and I’m asking our freshman to step up,” Dutton said.

The Colts (23-4) won the first two sets largely on kills from sophomore Kayli Cleaver including building a large double-digit lead in the opening set. The Panthers fought back to within four points late in the first set but the Colts eventually won by six.

Cleaver added a solo block late in the second set after West led by three to four points for the majority of the set.

Patton slowly got back into the match in the third set finding ways to counteract the back sets of Addie Barbee for West’s kill attempts.

Neither team led by more then three points in the final set. Patton led 3-0 early but West fought back to take a 5-4 lead on a Cleaver tip kill. Two more kills from Cleaver gave West a 10-8 lead later in the set.

With the set tied 12-12, West’s kill attempt was long, forcing a time out. The Panthers led 14-12 but Madison Kee gave the Colts one more chance with a kill.

On the final point, Patton’s Ella Gragg got the kill from the outside to end the Colts’ season and send the Panthers into the third round to host No. 14 Surry Central who won in five sets at No. 3 West Wilkes Tuesday.

Cleaver and Kee had 14 kills each for West while senior Dani Moss also finished with 14 kills. Addie Barbee had 51 assists for the Colts

Dutton talked about the team’s two seniors, Moss and Raelee Furr, saying both made big progressions in the three years she has been with the team (Dutton was an assistant coach for two seasons before taking over this season as head coach).

“Each of these girls have grown just in the last three years…there’s so much potential,” Dutton said.

Her team was so driven to play volleyball, the West coach said, whenever she uploaded game film on Patton for the team to see over the weekend, the players had all already watched it individually before the coach could even text the players about the film.

“I don’t think any high school coach can say that about every single one of their players on the team. Every single player wanted it so bad.”