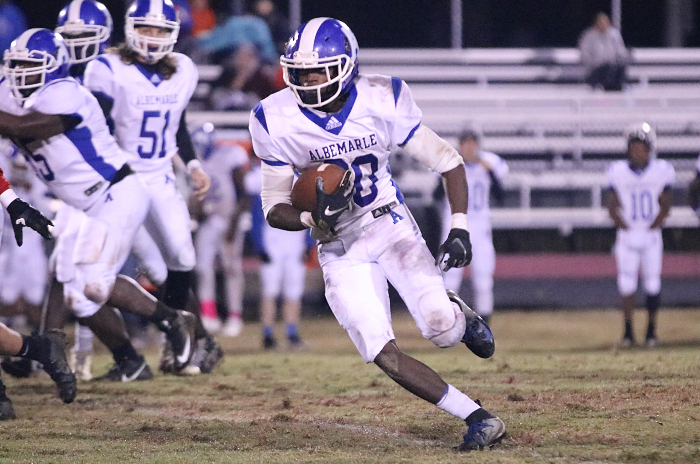 Julius Smith rushed for four TDs for the Bulldogs in a road win at South Stanly. (Photo courtesy of Shannon Byrd)

Scoring on runs of 10, 7, 9 and 11 yards, Smith repeatedly sliced and diced the South defense throughout the game.

“I give all the success to my blockers,” he said. “They blocked really good tonight.”

“He has been huge for us all year,” said Albemarle head coach Richard Davis of Smith.

Albemarle answered back in the second. Bulldog running back Julius Smith got his team on the board with a 10-yard TD scamper midway through the second.

A short while later, QB Antonio Burns scored on a 26-yard TD run to expand the lead, 14-6.

The first half was extremely sloppy with both teams penalized 75 yards each.

Albemarle took control in the second half with long runs by Smith bleeding the clock.

He said each long run through the Bulls’ defense early in the game, gave him more confidence as the game progressed.

A crucial muffed punt by South gave Albemarle prime field position towards the end of the third quarter. A few plays later, Smith ran for a 7-yard TD, extending the Bulldog lead to 21-12.

Albemarle pushed the lead to 27-12 after yet another Smith touchdown run in the fourth.

South quarterback Jaquez Cooke threw a 30-yard touchdown pass to Malik Kluttz with about six minutes left to keep the game within reach but a failed two-point conversion kept the Bulldogs up nine.

Besides scoring four times, Smith also intercepted a pass late in the fourth that staved off any potential South comeback.

Albemarle iced the game with an 11-yard TD run by Smith put the Bulldogs up 35-18 in the final 30 seconds of the game.

“I thought we did a good job of being physical and we played fast,” Davis said.

The Albemarle defense harassed Cooke all game, never letting him get comfortable in the pocket.

“We’re athletic up front and we thought that we could do a good job with our front four of keeping him in the pocket and making him earn his yards,” he said.