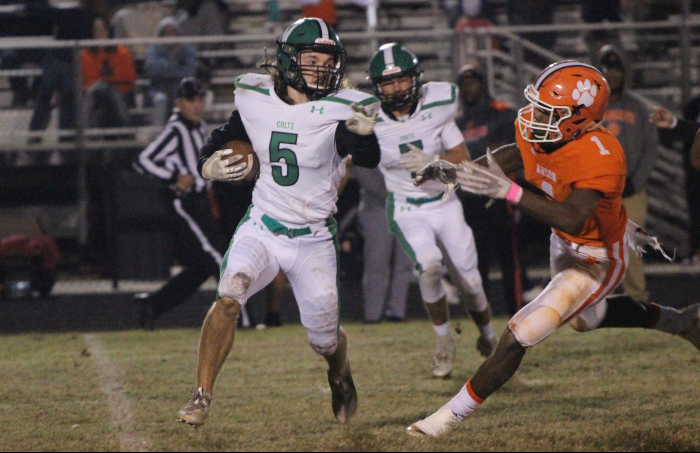 Playing without Div. I prospect Jordan Poole, the Colts struggled to move the football, never getting closer to the end zone than the Bearcat 18-yard line.

“Playing without Jordan, trying to find a rhythm, when you turn the ball over especially driving to score it’s tough,” West head coach Brett Morton said.

An early fumble set up the first of two rushing touchdowns for Anson (7-3, 3-0 RRC) as senior Dequan Sturdivant scored up the middle from 25 yards out 4:30 into the game.

“You can’t turn the ball over against a football team like that,” Morton said. “They’re good. They have the ability to strike fast.”

Anson head coach Ralph Jackson said it was vitally important for the Bearcat to strike first in the game.

Morton credited Sturdivant for being a good player and solid kid but attributed the two scores to missed tackles.

“We didn’t tackle as well as we have this season…we have to work on that. It’s just not our night tonight,” Morton said.

Another fumble in the second quarter led to a 41-yard touchdown pass from a scrambling Wesley Lear to R.J. Jackson, the head coach’s son, who also later added a 10-yard TD catch from Lear in the fourth quarter.

West’s best offensive play of the game came late in the first half when Jordan Manshack found Will Barbee who outfought a Anson defensive back to make the 26-yard catch. The drive later stalled on fourth down at the Anson 18 when Manshack was sacked.

Jackson talked about the Bearcats’ focus of stopping fullback Gavin Hudson with no Poole in the lineup.

“Since (Poole) didn’t play, we wanted to make sure (Hudson and Manshack) didn’t hurt us,” Jackson said.

The win gives Anson at least a share of the Rocky River Conference championship and the tiebreaker over West Stanly for the No. 1 seed heading into the state playoffs.

Jackson, a former standout running back from West, said he didn’t care who his team won against Friday night for the title.

“I wanted to win. Now being it is West Stanly, yeah, it’s a little sweeter. West is a great place but we’re Bearcats now.”