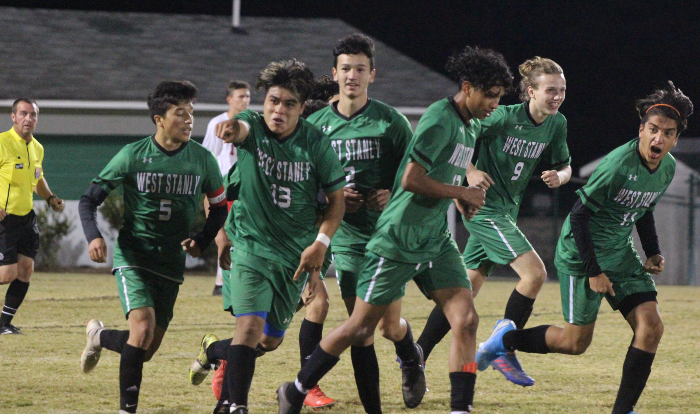 Freshman Santos Villanueva celebrates with his teammates after scoring the only goal in Wednesday's 1-0 win. (Photo by Charles Curcio)

In the first home playoff men’s soccer game for West Stanly since 2008, the Colts took advantage of a misplay by the Forbush goalie to earn a 1-0 win Wednesday.

The victory for West (11-11) was the Colts’ first home playoff victory as well as the only playoff win in regulation in school history. Last season, West advanced to the second round winning in the first round on penalty kicks.

While controlling possession of the ball for the majority of the first half, West (11-11) missed on early scoring chances and limited the offensive opportunities for Forbush (16-8-1).

“We like to maintain the ball early especially against a team that can hurt you,” West head coach Ivan Osorio said.

Defensively, West keeper Jairo Marquez made a diving save in the 16th minut eand made several key stops throughout the match, including a point-blank chance with three minutes left in the game, to earn the shutout between the pipes.

“I couldn’t do it without my defense. First half, they saved me many times,” Marquez said.

In the 34th minute, a long kick into the Forbush goalie crease was mishandled by the Falcons’ keeper. Freshman Santos Villanueva corralled the loose ball and flipped it over the keeper for a goal.

“We took a shot from the outside and I followed it in…I did what Coach always tell us to do. With any shot we have to follow in and that’s what I did,” Villanueva said.

Physical play picked up in the second half including a yellow card was issued against West on a sliding tackle with 25 minutes left.

West’s keeper had to come out of the game with 18 minutes left after being hit in the head in a collision with a Falcon player. Jackson Smith replaced him for the next 10 minutes of the match before Marquez returned.

The Falcons also got a free kick just five yards behind the penalty kick line but the West defensive wall stifled the shot attempt.

Logan Brown later collided with the Forbush keeper in a battle for a long ball into the crease.

“Our back line did a good job of keeping (offensive) chances away,” Osorio said about West’s defense.

“(Marquez) does it time and time especially in important games, kind of like our last playoff games,” the West coach added, referring to last season.

The Colts travel to Marshville to take on fellow RRC opponent Forest Hills (21-3) Saturday. The Jackets advanced with a 6-2 win over Lake Norman Charter.

Forest Hills won both games this season with West, 3-0 and 4-0, with Osorio saying both teams know each other’s style of play well.

“It’s always a tough game back and forth,” the Colts’ coach said about playing the Jackets, adding West needs to eliminate some mistakes and create more offensive chances up front.

“I think we can give them a good run.”